There’s been a lot of clean-up in Arlington following last Thursday’s strong storms that produced a weak tornado.

The National Weather Service says the tornado formed adjacent to the Army Navy Country Club and lasted for six minutes on its 4.5 mile journey through Pentagon City and into Washington, D.C. The F-0 tornado had peak winds of 60-70 miles per hour.

The Army Navy Country Club property experienced quite a bit of damage, and a spokesperson issued the following statement to ARLnow on Monday:

“The tornado did interrupt some of the Club’s golf operations, as we had to close 18 of the 27 holes of golf in the Club’s Arlington location. Due to the tornado, we lost dozens of trees, several water coolers, trash cans, and benches on the course. We are fortunate that the path of the tornado did not cause any injuries or damages to the buildings.”

The last time a tornado was recorded in Arlington was on September 24, 2001, when an F-1 that originated in Fairfax County traveled northeast for 15 miles through Alexandria and Arlington, then it crossed the 14th Street Bridge into the District. It caused extensive damage and injured two people in south Arlington. 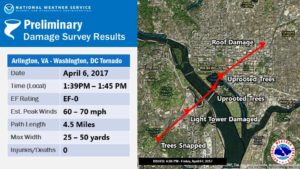 The scene was different for Thursday’s tornado in Arlington and the two others confirmed in the region that day, said Chris Strong, a warning coordination meteorologist with NWS Baltimore/Washington. Not only were the tornadoes weaker, but they also formed in a different manner.

“These weaker ones last week were basically eddies along a gust front, rather than more classic supercell thunderstorm tornadoes,” Strong says. “Those eddies produced small whirls of wind that in narrow corridors snapped some trees and caused siding and roofing damages.”

Some of that damage occurred when a portion of the facade and roof of the Macy’s at the Pentagon City mall ripped off and fell onto a car, resulting in one minor injury.

Technological advances have prompted changes in how local emergency managers warn the public about tornadoes and other weather emergencies. Some parts of the country, especially those that are more prone to tornadoes, use sirens as a warning. But sirens aren’t necessarily as effective in Arlington and the District, partially because of the dense buildings and foliage.

“Tornado sirens are not used much in this region of the country,” Strong said. “One of the reasons they work better in tornado alley is the wide open spaces with lack of trees that allows the sound to travel well.”

Outdoor audible warning systems other than sirens have had varying success as well. In 2007, Arlington received a federal grant and launched a pilot for an outdoor warning system with speakers and sirens in eight of the county’s denser residential and commercial areas. That technology has fallen out of favor with the county, though, because tests found that the voice messages and tones can’t penetrate newer buildings.

“We tested the system regularly and found the voice messages became increasingly less understandable with the addition of new construction and the corresponding degradation of the radio signal,” said Jack Brown, director of the Arlington County Office of Emergency Management.

Instead, the county’s OEM relies on spreading emergency messages through technology citizens commonly use: smartphones.

“With the saturation of smartphones the past few years, we made a conscious decision to discontinue pursuing other technology,” Brown said.

OEM encourages all residents to sign up for Arlington Alert, which sends emergency notifications — including NWS severe weather warnings — via mobile devices and social media.

The April 6 situation was a bit unique because NWS didn’t classify the event as a tornado until the following day, so no advance tornado notifications were sent. That’s why Strong recommends taking severe thunderstorm warnings seriously and preparing for potential escalation.

“Everyone should be ready to get indoors and away from windows (preferably on the lowest floor) with either a Severe Thunderstorm Warning or a Tornado Warning,” Strong said. “They both are saying there is the expectation of damaging winds somewhere in that threat area that is warned.”