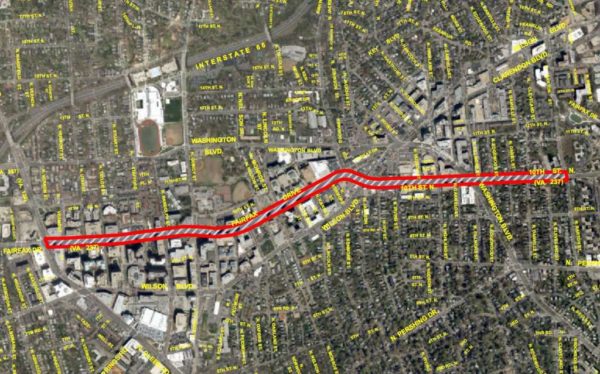 (Updated at 2:10 p.m.) The county could gain control of a section of Fairfax Drive under a plan before the Arlington County Board.

The Board will vote Saturday on whether to request that the Virginia Department of Transportation and Commonwealth Transportation Board transfer control of the road between its intersections with N. Glebe Road and N. Barton Street. Both bodies would then have to approve the transfer, but VDOT has already tentatively agreed to the deal.

If Arlington gains control of the section of Fairfax Drive and 10th Street N. between Ballston and Courthouse, also known as Route 237, it would limit VDOT’s involvement in construction projects.

Currently, roads under VDOT’s control require extensive review before any construction can be done. Making the portion of the roadway a part of Arlington’s local road system would streamline such reviews and give the county more flexibility to implement multimodal improvements.

“Since many of the County’s projects on Route 237 utilize urban standards that are not typical of VDOT plans, this often requires obtaining design exceptions in order to implement the project,” said a staff report. “This cumbersome design-exception process adds time and expense to each project.”

The report recommends the Board approve the proposal, arguing that added flexibility in managing several streets that run in parallel to Interstate 66, which is being widened under the “Transform 66” project, is worth the extra expense.

The move is expected to cost the county upwards of $60,000 a year, according to a fiscal impact statement.

Unlike many other counties in Virginia, Arlington County staff performs the full range of road maintenance functions on the 1,051 lane miles of road and would accept conveyance and responsibility for the maintenance of the additional 6.61 lane miles constituting this portion of Route 237. Per Section 33.2-366 of the Virginia Code, Arlington County receives a per lane-mile payment each fiscal year for the maintenance of its secondary road system. The Fiscal Year (FY) 2018 rate, approved by the CTB on June 20, 2017, is $18,515.71 per lane-mile; the rate typically escalates each year. Maintenance responsibilities include landscaping, sidewalk repair, street sweeping, paving, plowing, signage, and pavement markings, which cost the County roughly $28,000 per lane-mile of roadway, based on the County’s most recently reported average maintenance cost per lane-mile.

… This equates to $60,000 – $70,000 in additional net tax support to the County. The precise level of service for this portion of Route 237 and associated costs would be determined during the FY 2019 budget deliberations.

The CTB would likely vote on the transfer in September if it is approved by the County Board.