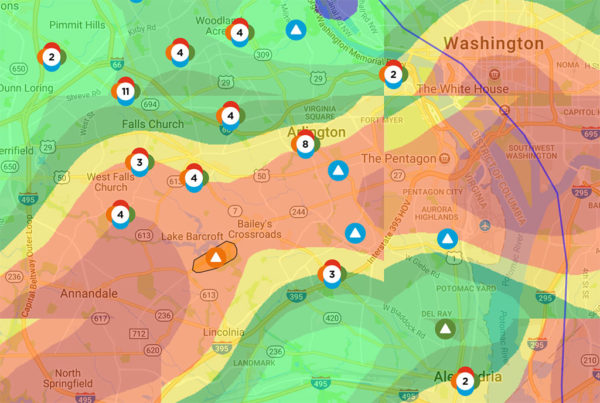 (Updated at 7:10 p.m.) More than 8,000 Dominion customers in Arlington lost electricity after a powerful storm blew through the area.

As of 5:30 p.m. Dominion was reporting 8,089 without power in Arlington, including in the Fairlington neighborhood and along Lee Highway. Some traffic lights were said to be dark on Lee Highway, including at the busy intersection of Lee Highway and Fairfax Drive.

Several instances of downed trees, downed power lines and people stuck in elevators were reported around the county.

Meanwhile, major delays were reported on Metro’s Orange, Silver and Blue lines due to a tree that struck a train near the Dunn Loring station during the storm.

Storm with heavy rain and wind rolls through Pentagon City, but one man in an orange poncho doesn't seem to mind pic.twitter.com/bTlNnZ82xR

Wind gust of 48 mph reported at Reagan National. Numerous report of trees down in Fairfax Co (Oakton to McLean). https://t.co/riO4A9hQm6

Only on my OL metro train stuck outside Dunn Lorring. pic.twitter.com/NIjLhTHBIT