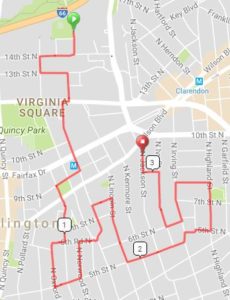 The local chapter of KidicalMass, a national organization centered around casual community bike rides for families, will take a trip to Carvel Ice Cream this Sunday (July 30).

The organization kicks off its third annual “Kidically Summer 3.0” series of bike rides with a journey to Carvel in Virginia Square. The ride begins at 4:45 p.m. at Hayes Park (1516 N. Lincoln Street), where kids and families can cool off in its sprayground prior to the ride.

From there, cyclists will ride through the Virginia Square, Ashton Heights and Lyon Park neighborhoods on a course just over three miles long. The ride will end with ice cream at the Carvel store in Virginia Square.

According to the event description, “The route is pretty short, and as flat as they come in Arlington.” There will be stop lights at all of the major intersections and the group will travel back together from Carvel.

KidicalMass describes their bike rides as slow, short and easy with each ride no longer than four miles and going at speeds of typically six miles per hour. The group has previously hosted similar events for Father’s Day, as well as a “Junior Park Ranger Ride” along the George Washington Memorial Parkway.

The group typically hosts one bike ride a month and all events are posted on its website.