Arlington County is home to many of Virginia’s top public schools. According to the popular ranking website Niche, Arlington Public Schools is ranked as the No. 1 school system in the state, out of 132 different school districts.

Within APS there are nearly three dozen public K-12 schools. So how do they rank?

Ranking methodologies, it should be said, have their flaws and do not necessarily reflect the quality of instruction at any given school. They’re also relative — so even the last-ranked elementary school in Arlington, an excellent school system, received an overall “A” ranking from Niche.

But for those who want to see how Arlington public schools stack up, debatable methodologies and all, we’ve taken some of the most prominent school rankings and averaged them to get a better picture of which are at the top and which have room for improvement. 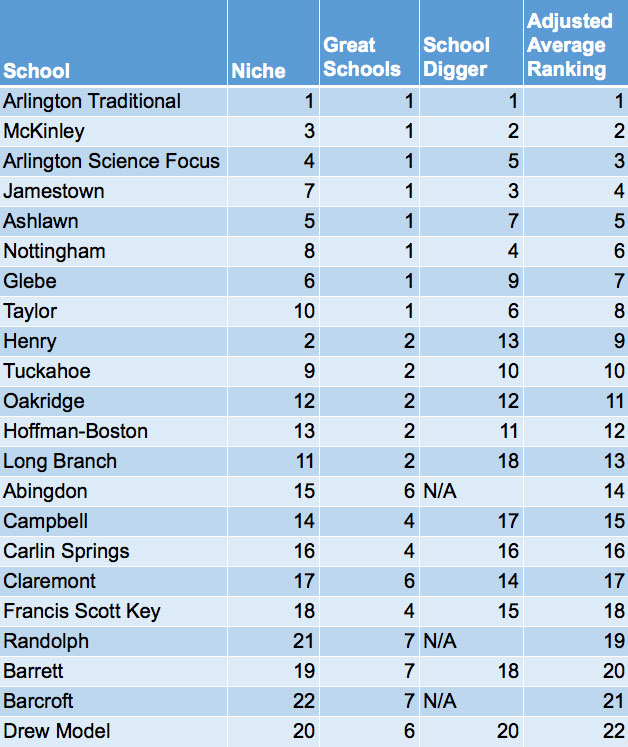 Discovery Elementary, which opened in 2015, is not included in the rankings.

Great Schools operates in a system similar to Yelp, where a school receives a certain amount of stars out of 10. For example, four schools were tied for having 10 stars, or a perfect and “highest” ranking score, three for nine stars, and so on which is why so many elementary schools have the same Great Schools ranking.

The next chart shows how APS middle schools compared to each other’s ratings on Niche, SchoolDigger and Great Schools.