I thought I would take a break from writing about fermented water, grain and hops to shed some light on recently or soon-to-be available fermented water and honey and water and apple cider. The fact that neither of these companies makes their beverage in the way that I think is typical or expected makes them compelling.

Fellow mead lovers, James Boicourt and Andrew Geffken, founded Charm City Mead Works in 2014 after meeting at the Chesapeake Bay Maritime Museum where they both worked. Very much like their brothers and sisters in beer, the pair parlayed home brewing enthusiasm and skill into a full-time business.

Mead has a rich history in nearly all ancient and many contemporary cultures. Found in Chinese vessels that date back as far as 7000 BCE, residue of honey and evidence of fermentation show that the fermentable sugar in honey has been known for a very long time.

More recently, sort of, the Norse — Vikings — wrote elaborate stories about the divine properties of mead. Notable is the story of how Odin stole the Mead of Poetry, a tale of murder and deception and a divinely sourced mead that gave the drinker great powers of poetry.

It has been an alternative to foul and filthy water, the drink of gods, the drink of Renaissance Fairs, but Charm City just wants you to enjoy the labor of their love. They offer 12 oz. cans of carbonated meads — albeit lightly carbonated — and larger bottles of still mead. They recommend either enjoying them on their own or as mixers in cocktails.

I tried a few of their offerings. 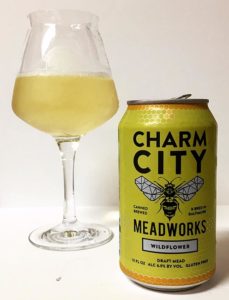 I’m going to be honest, my experience with mead prior to writing this article was with the treacly sort that purports to be the official drink of the Ren Fair. I was not prepared for the white wine-like experience that I had.

When Charm City claims that this is the Champagne of meads, they’re not far off. I almost couldn’t believe my nose at first, I tried to paint a picture that was not white wine until I had to admit that what I was experiencing was, in fact, very much like wine. It’s even fruity and lightly sweet, but you won’t be disappointed as the finish leaves a distinct honey flavor lingering in your mouth.

At 6.9% ABV, this is certainly not wine and it went down very smoothly. I enjoyed mine chilled and maybe even a tad too quickly. It’s that drinkable. 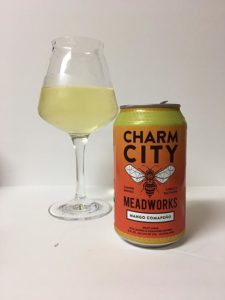 Billed as “Not too much heat, not too much sweet,” this mead is a limited Summer release that celebrates warm sunshine. Inhaling, I got more white grape mingled with clear mango and red pepper flakes — an intriguing mix to be sure.

I’ll admit that I didn’t know what the Comapeño pepper was — I still don’t know actually. Is it going to be unbearably hot like the habanero Sculpin? The reassuring answer is, no. I found just enough heat to get my attention that started mid sip and continued through the finish. This is a fruity mead that doesn’t necessarily convey the aroma of mango into the flavor, but still manages to create a summery experience in the glass.

Though Charm City makes a carbonated mead with hops, this still mead uses rosemary as a bittering flavor. They even claim that rosemary works better with mead than do hops. Since I was not able to try the carbonated hopped mead, I can only speak to the experience of drinking their rosemary mead.

White wine in the aroma shouldn’t surprise anyone by now, but I also got a distinctly sweet clove spiciness. In the mouth, the rosemary mead was lightly sweet — like a Riesling — and slightly tart, again avoiding the syrupy sweetness I kept expecting. What rosemary flavor I got came through as a clean, almost pine flavor that stayed in the background.

You’ll notice that this still mead is almost twice as strong as the canned meads above. I’ll confess that it did not seem so strong to me, it was so drinkable. As for how to drink it, I enjoyed mine on its own. But, Charm City reached out to me to recommend using this mead as mixer. I’ll definitely try that next time I get this.

Opening its doors in November of 2016, Graft Cider was started by former Baltimore-area resident and cider maker Kyle Sherrer. He and his father founded the high-end cider maker, MillStone Cellars in Monkton, Md. north of Baltimore. Knowing that the product at Millstone was not know for blurring the boundaries and flavors between beer and cider the way he wanted, Sherrer went North.

Upstate New York is to apples as Florida is to oranges — it’s apparent in the geographical names: Cortland and Empire take their names from places and names associated with New York. There are numerous varieties that can be acquired at relatively low cost to make good cider. So Graft became a New York cidery and not a Maryland one.

I mentioned that Kyle was interested in blurring the boundaries between beer and cider, particularly sours. According to the Federal Alcohol Administration Act, “Cider must be derived wholly (except for sugar, water, or added alcohol) from apples.”

What is allowed are non-grain adjuncts that alter the mouthfeel or flavor like lactose (sugar derived from milk), hops or other fruit. Graft’s focus is on mostly wild fermented ciders that they feel both fit right in with today’s tastes for the sour and link historically to mainland European farmhouse ciders.

For the uninitiated, these are challenging ciders. For one thing the taste noting like Strongbow or Angry Orchard or most of the other ciders on the market. For another, they don’t look like them either. I’m giving you a sneak peek into what they offer as they have not officially launched at Dominion Wine and Beer yet. They are definitely coming soon. 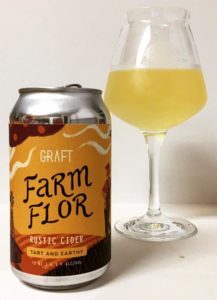 I was given fair warning. That’s not exactly right. I was told by a friend that Graft made cider their own way. That it was not typically crystal clear cider. Or sweet. But that it was sour and probably cloudy — different. All those reasons are exactly why I’d buy a four-pack of Graft and stick in the box with the latest IPA or sour or stout.

This cider — I almost wrote “beer” — has an intoxicating aroma of homemade volcano — vinegar and baking soda — with an earthy wet bark lurking in the background. The initial sip was slightly shocking with vinegar — if you’ve ever had a “shrub” that contains vinegar as a main ingredient, you’ll understand. A clear apple flavor begins mid-sip and lingers on the tongue after you swallow. About half way through the glass, I no longer tasted the vinegar tang, but rather the apple with each subsequent sip. 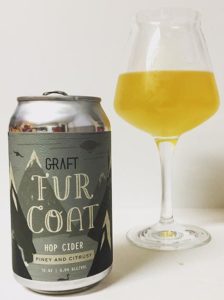 When blurring lines between beer and cider, you really have to use hops. Graft’s Fur Coat — unfortunately named as everyone who has commented on it has mentioned the involuntary imagining that their tongue is coated — uses Simcoe and Azacca hops to add both bitterness and flavor.

There are also juniper berries in there, which is particularly apparent in the aroma — a mixture of juniper, green herbs, mint and a hint of pickle juice. In the sip, Fur Coat is lightly sweet with a clean pine flavor — curiously more pine needles than pine resin — with a mild tartness in the finish. It seems that the distinct lack of malt from any grain, makes for a light, hoppy drink that goes down smooth. Both the name and the alpine-inspired artwork suggest a winter cider, but this is great on a hot day. 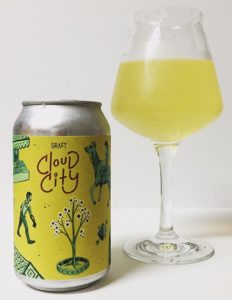 According to founder, Kyle Sherrer, the artwork and names of Graft’s ciders refer to different parts of the fictional world of “Graft.” Cloud City certainly looks and sounds like a fun place. I mean, this is a dreamsicle cider!

Brewed with lactose, for texture and sweetness, and pineapple, Cloud City starts out quite sour and smelling of baking soda and overripe apples. Let it warm a bit, though, and the vanilla and pineapple come out and combine with the velvety mouthfeel created by the lactose to complete the illusion of the dreamsicle.

If you’re a fan of sour beers, you’ll love this right out of the fridge. But if you’re less enthusiastic about sours, give Cloud City a few minutes after you pour it to let it warm. Like its namesake dessert, this is a treat even if it’s not very sweet.

Come in to Dominion Wine and Beer now to get Charm City mead. Graft Cider will be available soon. Stay tuned. Cheers!