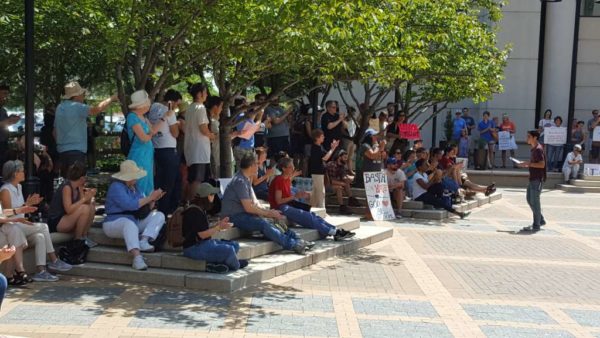 Charlottesville Solidarity Rally Held — Arlington County Board vice chair Katie Cristol was among those who spoke at a “Rally of Solidarity for Charlottesville” in Courthouse yesterday. The rally was intended to “actively condemn bigotry and racial hatred through a series of speeches, songs, actions, and a moment of silence.” [Facebook, WJLA]

Flashing Lights on I-66 — If you drove on I-66 this weekend and noticed flashing lights from equipment overhead, don’t worry: you’re not getting a ticket. Instead, VDOT is testing new toll equipment. Non-HOV drivers are expected to begin paying a toll to use I-66 inside the Beltway in December. [VDOT, NBC Washington]

Old Oak Tree Saved — A “mighty” oak tree that pre-dates the Civil War was saved from being removed during the construction of a new home thanks to a petition by neighbors and a developer willing to consider their concerns. The tree, at the corner of N. Nottingham and 27th streets, is 18 feet in circumference and one of Arlington’s 100 designated “champion” trees. [Washington Post]

WeWork Offering Free Space on Mondays — Coworking provider WeWork is offering free workspace at its D.C. and Northern Virginia locations — including its Arlington location in Crystal City — on Mondays as part of a new promotion dubbed “#SummerMondays.” The promotion runs through the end of September. An RSVP is required. [WeWork]