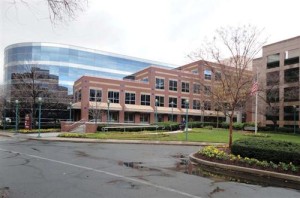 A $13.8 million plan to move Arlington Public Schools’ offices from the Education Center to prepare for its use as a high school is set to begin later this year.

The Education Center, which houses various APS offices as well as the Arlington School Board’s meeting rooms, will be used as part of a “hybrid option” alongside the Career Center to add 1,300 high school seats for APS. The Education Center is adjacent to Washington-Lee High School.

APS’ offices are set to relocate to Sequoia Plaza Two at 2100 Washington Blvd, which already houses the School Health Bureau that provides health programs and services, as well as the Parent-Infant Education and Environmental Health programs.

Separately, the county’s Department of Human Services consolidated more than 80,000 square feet of facilities into three buildings at its headquarters at Sequoia Plaza in 2014.

As part of a plan approved last December, the School Board agreed to amend its lease at the property and add just under 80,000 square feet of new office space. In May, the Board approved a design for the office space, which will be spread across four floors.

At its meeting Thursday, August 17, the School Board advanced a construction contract for Sequoia Plaza Two, and will vote to approve the contract as an action item at its September meeting.

Jeff Chambers, APS’s director of design and construction, said that first moving phase would be to move APS staff already based at the building elsewhere to accommodate construction. Chambers said the project will not require any more funding than the $13.8 million already budgeted.