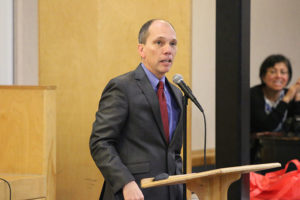 The Democrats running for Arlington County Board and the Virginia House of Delegates say they are united with the Board in its desire to rename Jefferson Davis Highway and Lee Highway.

The county will need to first obtain the legal authority to rename both stretches of state highway within its borders, an uphill battle in the GOP-controlled General Assembly. But the incumbents pledged to try to do so, so the county can choose “who in our history we want to honor and celebrate.”

Erik Gutshall, Democratic nominee for Arlington County Board, said “I am proud to live in a community that has long shared the values of diversity and inclusion. I fully embrace the County Board’s determination to garner local control of the names of our roadways, as I know Arlington’s delegation to the Virginia General Assembly do.”

“It’s long past time for us to rename highways that were labeled to send a hateful and divisive message to people of color in our community,” said Delegate Alfonso Lopez (49th District), House Democratic Whip. “I look forward to working with the Arlington County Board to make sure they have the necessary authority from the General Assembly to make these important changes.”

Delegate Patrick Hope (47th District) said, “I have long-supported the renaming of Jefferson Davis Highway and Lee Highway in Arlington and commend the Arlington County Board for this bold statement of leadership. I look forward to supporting legislation to grant Arlington and all localities the freedom to rename buildings, roads, and to remove monuments that do not reflect our values.”

“Giving localities the authority to rename highways — like Jefferson Davis Highway — is long overdue,” said Delegate Rip Sullivan (48th District), “This is not about erasing or trying to change history — indeed, we must never forget the evil that led to our Civil War. Rather, this is about a community choosing who in our history we want to honor and celebrate. Arlington County should have that choice. As Dr. Martin Luther King, Jr. once said, ‘Our lives begin to end the day we become silent about things that matter.’ This matters, and I applaud the County Board for choosing not to be silent on this important issue.”

“I’m very pleased that the Arlington County Board is committed to renaming the Jefferson Davis Highway, ” said Delegate Mark Levine (45th District). “Changing those street signs will no longer honor the Mississippi traitor (with little or no connection to Arlington) who was President of a rebellious group of states that seceded from the union to enforce and protect their cruel and odious institution of slavery. Street signs bearing the current name of this highway do a gross injustice to Arlingtonians who are loyal to their nation and who abhor slavery. I know the vast majority of us are looking forward to seeing these signs no more.”