Last summer, I wrote about Dogfish Head Brewing Company’s craft beer tourism efforts in Delaware while I was on vacation there. This year, we took a special trip to the island of Maui in Hawaii where I decided to pay a visit to the two commercial craft breweries there — Maui Brewing Company (MBC) and Koholā Brewery.

According to the Brewers Association, there are 14 breweries in the state of Hawaii placing it 48th out of 50. But that stat doesn’t tell the whole story. When you’re in Hawaii, each island can feel like it’s own country.

Two craft breweries on Maui means that you have plenty of options as most popular restaurants and hotels offer either or both breweries as choices. Occasionally you’ll even find something from one of the other 12 Hawaiian breweries. Of course, Kona Brewing Company is always represented. But when you can have fresh beer from truly independent craft breweries that are just down the road, do it. 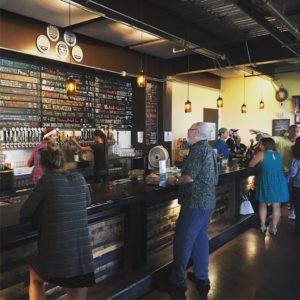 Maui Brewing Company, established by Garrett Marerro and Melanie Oxley in 2005, is like the older brother of craft brewing on Maui. You can find it in the South Maui town of Kihei, just up the hill from the highway that separates the foothills of Haleakalā and the ocean. The tap room at the brewery reminded me of Ocelot Brewing Co. with plenty of room for tables and even some indoor games. You’ll find a long bar with more than 20 taps featuring mostly Maui beers with several guest takeovers.

If you’re lucky you’ll even run into Garrett Marrero talking to beer lovers by the bar — you’ll see him in the lower right corner of the taproom photo. Sample some of their beers in flights, full pours, or to-go in crowlers, growlers or cans. Both craft breweries on the island have crowler machines to make it easier to enjoy their beers on the beaches where bottles are not allowed.

Specializing in whatever they happen to be brewing at the time, MBC takes inspiration from and regularly uses local ingredients and flavors. For instance, the Pineapple Mana Wheat Ale uses the extremely flavorful Maui Gold pineapple to create juicy, crushable Hawaiian-style hefeweizen. I sampled a few of their less common offerings to give you an idea of how rewarding a visit to their brewery can be.

It’s important to note that MBC occasionally brews exclusive beers for local businesses, this is one of those. It was only available at the South Maui resort, Grand Wailea. Brewed to celebrate the 25th anniversary of the resort, this gose was brewed with the popular salty and sour dried plum, li hing mui, and honey from the Big Island.

I enjoyed mine in a plastic cup by the Grand Wailea’s enormous pool, which was perfect. Definitely smelling of stone fruit, this beer is a mild gose — malty and salty with a light tartness. It turns out that in the tropical heat and humidity, such a beer just hits the spot.

Having this at the beginning of my trip, I had no idea what li hing mui was. I made it my mission to try li hing mui syrup, reduction, or powder on every shave ice that I had, what a treat.

Speaking of shave ice — the popular Hawaiian frozen treat made by rotating blocks of ice across a blade to shave it and sweetened with syrups — MBC couldn’t pass up the opportunity to make this beer. Fruity and tongue-curdlingly sour, lemon, banana and unripened plum combine to make a liquid version of the popular treat. Though delicious and refreshing, I imagine this would be even better with a choice house-made syrup to take the edge off the sour. Either way, it’s a must-add to your flight. 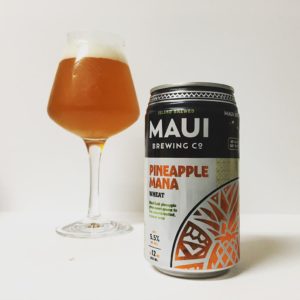 The only MBC flagship beer that I included in my tasting flight — largely because I don’t gravitate toward this style — proved to be one of the most satisfying. As I mentioned above, MBC uses the sweet, aromatic native Maui Gold pineapple in this otherwise traditional wheat beer.

As you lift your glass toward your mouth, the expected banana and clove explode with fresh pineapple and a slight honey sweetness. This is a simple and refreshing beer — perfect at sunset as the temperature begins to drop.

The tourist luau these days is typically just a big dinner theater, often with an open bar and a traditional Hawaiian buffet. After the welcome Mai Tai, I ended up enjoying MBC’s Pineapple Mana Wheat for the whole evening at our luau — it was super tropical and sessionable.

MBC first came to my attention in 2012 when the Coconut Porter won the Washington Post’s Beer Madness 2012. That was just the regular porter, now known as Hiwa Coconut Porter, the darkest MBC flagship beer. Since then, MBC has played with the winning combination of coconut and roasted malt making imperial versions that improve on the original.

One of the brewery’s offerings at this year’s SAVOR in Washington, D.C. was their rum barrel-aged imperial coconut porter called Black Pearl. That’s still my favorite version, but it’s very difficult to come by.

What’s easier to get and readily available at the Kihei brewery is the non-barrel aged imperial porter, winner of the gold medal in Field Beer at the 2016 Great American Beer Festival (GABF). It’s like drinking a coconut confection: toasted coconut, vanilla cake and a bit boozy. Being an imperial style, this was the strongest beer I had on the island. It’s a sipper unlike most of the beers that abound. Enjoy it in the light of the ubiquitous gas-fed tiki torches with the crashing of the waves always in the near distance. 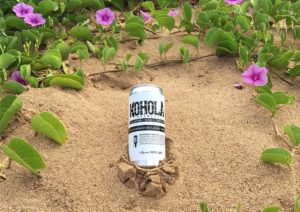 Koholā is the definitely the younger brother brewery — they even use sort of handed down equipment. Opened in 2015 by husband and wife, Christine and Ian Elumba in the original home of Maui Brewing Company, Koholā brews low alcohol beers to be enjoyed in the year-round sunshine on Maui.

Currently only available in kegs, Koholā’s various beers can be found around the island at hotels and restaurants and at the industrial-style tasting room inside the brewery in Lahaina. I was reminded of the intimate setting inside Aslin’s garage doors.

Named using the Hawaiian word for “whale” — a common sight off the coast during the winter months — these beers are far from the typical craft beer connotation of the word. Meant to be accessible and drinkable, Koholā’s beers are the opposite of the whales, hard-to-find beers, that cause lines to form and populate Instagram and Untappd.

The smallish 21 and over tasting room was hopping with a combination of locals and curious tourists. Patrons at the bar chimed in with the both Christine and Ian as we chatted about the beers on tap and favorite local businesses.

After consulting with both Ian and Christine, I chose three crowlers of their super fresh beers.

Invoking the Hawaiian word for harmony, Lokahi pilsner is truly a balanced and refreshing brew. Winner of the bronze medal in the German Pilsner Beer category at the 2016 GABF, this is a clean and simple lager. The aroma was jam packed with Italian bread, chamomile, green apple and white grape.

Sweet and smooth, Lokahi is a malt balanced lager with a slightly floral edge that cuts the grain. As we relaxed by the pool on our final day, I opted for this crushable pilsner over a tropical mixed drink and was not disappointed. It’s a great beer at cookouts, after yard work or with friends on the beach. 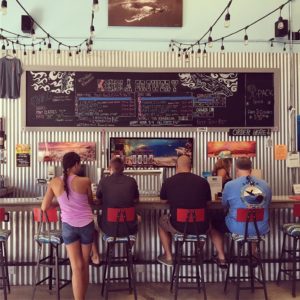 A true session IPA, Shaka Island is meant to be enjoyed liberally in the very warm climate of Maui, particularly in Lahaina, which is Hawaiian for “cruel sun.” It’s a hop balanced IPA with a slight malt backbone.

I enjoyed the bright herbal flavor that was enhanced by a dry bitterness. This is not a sweet, cloying IPA, but rather it’s one that refreshes with a relatively brief burst of classic hop flavors. Made for day drinking, grab this IPA if you prefer more hops than a traditional pilsner provides. Grab a crowler and enjoy it al fresco.

The impression that I got from my brief, but engaging conversation with Ian is that Koholā focuses on simple, approachable flavors in their beers. So, I was a bit surprised when he said I had to try their Mean Bean Coffee stout — coffee stouts are simple enough, but this is still more involved than their other offerings. He assured me that it had a good story to go along with it.

It turns out that there are coffee farms on Maui — you’ve heard of Kona coffee (that’s on the Big Island). The space next to Koholā is occupied by the Maui Grown Coffee Company roaster. Some of the Maui Grown Coffee employees are regular visitors to the brewery and suggested a collaboration.

They could bring the coffee and Koholā could bring the brewing equipment, you get the idea. They ended up using a variety of bean called the Red Catuai, a wine-like coffee bean that is grown up the highway on Maui Grown’s Ka’anapali farm.

The result was my favorite beer that they had to offer. The aroma is rich with espresso, vanilla, cereal and cocoa –pretty expected. What I was not expecting was the sip — a light mouthfeel with healthy amount of bitterness from the coffee and the roasted malts — which was almost reminiscent of a black IPA. 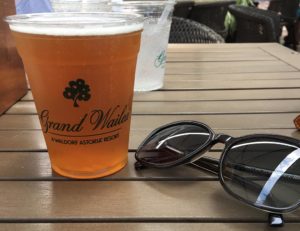 The use of bittering Magnum hops and flavorful classics, East Kent Goldings adds to the complexity of this stout and perhaps allows a drinker to blur the lines between styles. Though Mean Bean is not hop forward, there’s still a dance between all the flavors that makes this a beer for a variety of beer lovers. Incidentally, Ian recommended the coffee at Maui Grown, which was heartily seconded by a couple of the locals at the bar. It’s good stuff, I only wish I had known earlier in the trip!

Though you have to travel to Hawaii to find Koholā beer, you can find Maui Brewing Company’s flagship beers along with some seasonal offerings at Dominion Wine and Beer. Wherever you go, you’re bound to find great beer. Maui is a perfect example of this. As they say in the Aloha State: aloha and mahalo. Cheers!