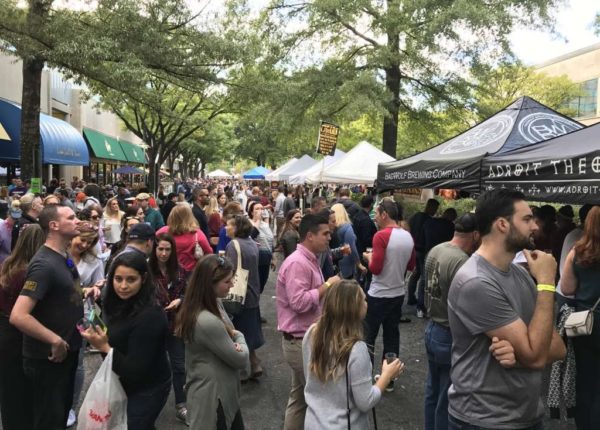 Reaction to Las Vegas Shooting — Reactions from local officials are beginning to come in in response to the mass shooting at a Las Vegas concert, which is now the deadliest mass shooting in U.S. history. “Will the corporate gun lobby please wake up? #PrayersAreNotEnough #HowManyMore?” tweeted state Sen. Adam Ebbin (D). Meanwhile, a “gun violence prevention roundtable” planned today in Alexandria, with former Congresswoman Gabrielle Giffords and Captain Mark Kelly, has been cancelled “in light of today’s events.” [Twitter, Twitter]

Stats Behind Arlington’s Millennial Growth — The growth rate of Arlington’s millennial population between 2007 and 2013 was 82 percent, the highest in the nation. Meanwhile, development and transportation stats bear out how Arlington is growing and attracting young people. For instance, only 44 percent of Arlington’s population drives alone to work, compared to the 76.4 percent national average. [Bisnow]

Conservative Reporter vs. Donut Store Employee — Ashley Rae Goldenberg, a reporter for the conservative Media Research Center who goes by the Twitter handle @Communism_Kills, says she was harassed on Twitter by an employee of the new Dunkin’ Donuts store in Virginia Square. [Twitter]

Bomb Threat at Rosslyn Building — Updated at 11:15 a.m. — Someone called 911 with a bomb threat against an office building on the 1100 block of Wilson Blvd Thursday evening. That is the same block as TV station WJLA (ABC 7). No explosives were found during a police search of the building. [Patch, Arlington County]

Teen Provides Art to the Formerly Homeless — Allison Stocks, a 15-year-old sophomore at Yorktown High School, founded a nonprofit that takes donations of art and then provides it to those “making the transition from homeless shelters into permanent housing,” thus helping to cover bare walls and make their new home feel more homey. [Washington Post]

Local Gamer Raises Money for Hurricane Relief — In the wake of hurricanes Harvey, Irma and Maria, local resident Scott Jones helped raise more than $1,700 for disaster relief by broadcasting a 24-hour video game marathon from his Arlington apartment. Jones is one of numerous gamers who have used their gaming skills to raise serious cash for charitable causes. [Los Angeles Times]