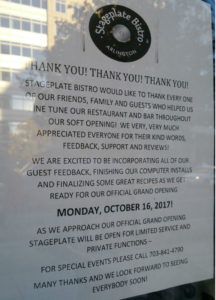 Stageplate Bistro in Ballston hasn’t always been open during normal business hours recently, but it’s not closing down. In fact, despite the limited service hours, the staff is preparing for the new restaurant’s upcoming grand opening.

A message on the front door at 900 N. Glebe Road, which is also posted on the restaurant’s website, thanks patrons who already have tried the restaurant during its recent soft opening. The grand opening is scheduled for Monday, October 16.

General Manager Mary Marchetti said the limited service has been to work out any snags, as this is the team’s first restaurant. She said customer feedback has been positive and staff has been able to incorporate customer suggestions in order to perfect operations.

“Just those little things, we were working it out,” Marchetti said. “We’ve had wonderful interactions with guests. I feel really good and really confident now that we’re going to be great.”

When an ARLnow reporter passed Stageplate Bistro during the typically busy dinner hours one day last week, customers trying to go in were met with locked doors. Upon reading the sign, though, several said they would come back for the grand opening and that they were just glad the locked doors didn’t mean the restaurant had met its demise so quickly.

The restaurant will serve its full menu at typical operating hours starting on Monday, October 16. It will open starting at lunchtime from Monday through Saturday, and for now it will be closed on Sundays, although brunch will be added in the future.

Marchetti says the Stageplate Bistro team is excited to be a part of the Arlington community. “We tried to talk with every single table [of customers] that came in,” she said. “Everyone was really interactive. The community has been so unbelievably great.”