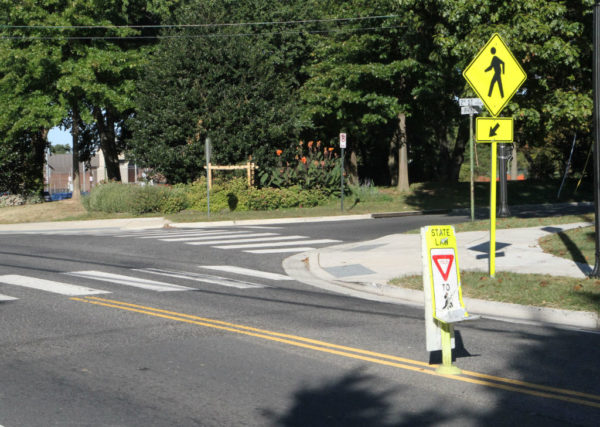 Parents of Thomas Jefferson Middle School students are petitioning for traffic calming measures on a stretch of road near the school where they report witnessing a number of vehicle-pedestrian close calls.

They’re asking for a crossing guard and a traffic-calming measure — such as a four-way stop — at the intersection of 2nd Street S. and Irving Street, which is a heavily traveled pedestrian thoroughfare for students going to and from school.

The entire stretch of 2nd Street S. near Thomas Jefferson Middle School, from Irving Street to Old Glebe Road, is well-traveled by vehicles and does not have four-way stops. Parents chose to ask for traffic calming at the Irving intersection because of the significant amount of both pedestrian and vehicle traffic at that particular spot. Plus it’s one of the few streets in the neighborhood that runs uninterrupted all the way from Columbia Pike to Washington Blvd., making it easier for motorists to speed than on adjacent streets.

The intersection, like the others on 2nd Street, may not have four-way stops, but it does have painted pedestrian crosswalks. Neighborhood residents say motorists ignore people in the crosswalks, though, especially during morning and afternoon rush hours. “That’s prime commuter time and prime school time,” said TJ parent Alisa Key.

Key saw a girl nearly get hit while walking in the crosswalk to school, and that prompted her to take action. “I couldn’t walk away from that without doing anything,” she said. “In the past two weeks, we have had multiple near misses and countless instances of motorists… disregarding kids in the crosswalk. We have taken it upon ourselves to help the kids cross safely because APS and the county have not.”

The group of concerned parents invited county officials to visit the site to see the dangers that students and other pedestrians face. The group reports that a number of representatives showed up from Arlington Public Schools, the county’s Department of Environmental Services, the police department and the county board.

DES currently is collaborating with APS and police on reviewing the intersection and will report the results of the study next week. According to a DES spokesperson, “The traffic study consists of collecting additional traffic volume, speed and pedestrian volume data to determine whether a four-way stop meets federal standards (Manual on Uniform Traffic Control Devices).”

Parents are hopeful that the results next week indicate the need for increased safety measures, including a crossing guard. In the meantime, they’ve been taking turns positioning themselves at the crosswalk in the morning to make sure children get to school safely. They’ve also started an online petition requesting traffic calming measures, which has more than 400 signatures.

Parents are particularly worried about what happens when the volume of students increases upon completion of a new elementary school at the TJ site.

“The intersection at S. Irving & S. 2nd Street is a magnet for kids, bikers, walkers, etc. because there are currently three community attractions at this site — TJ Park, TJ Recreation Center, TJ Middle School and soon to be coming Fleet Elementary School,” said concerned parent and Arlington Heights resident Colleen Godbout. “This intersection needs calming measures immediately.  We can not wait for the accident that is inevitable here.”