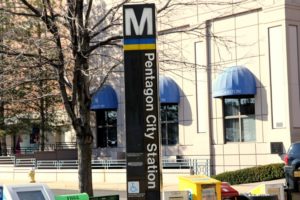 Shuttle buses will replace trains this weekend on a section of Metro’s Yellow and Blue Lines in Arlington County.

Buses will run between the Braddock Road and Pentagon City Metro stations from 7 a.m. Saturday through closing Sunday as crews install communication cables and rehabilitate platforms.

The Reagan National Airport and Crystal City Metro stations will be closed.

From a Metro announcement on the weekend work:

Yellow Line trains will operate at regular weekend intervals between Pentagon City & Mt Vernon Square and every 15 minutes between Huntington & Braddock Road. Customers traveling to/from stations north of Mt Vernon Sq should use the Green Line to complete their trip.

To allow for shuttle bus connections, the last train will depart Franconia-Springfield at 11:56 p.m. Saturday and 9:56 p.m. Sunday, 30 minutes earlier than normal.

For those not wanting to get on the free shuttle buses, ART’s 43 bus between Courthouse and Crystal City offers an alternative, as well as the Transitway along U.S. Route 1 between the Braddock Road and Pentagon City Metro stations via Potomac Yard and Crystal City.