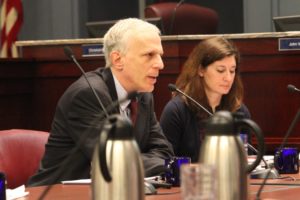 Arlington County could face a funding shortfall of up to $13 million in its Fiscal Year 2019 budget, according to budget projections by County Manager Mark Schwartz.

At the Arlington County Board’s meeting yesterday (Tuesday), Schwartz projected revenue will grow by 2.9 percent in FY 2019, but the county’s expenditures will grow by 4 percent. That would result in a funding gap of between $10 million and $13 million.

The funding gap assumes the current real estate tax rate of $1.006 per $100 of assessed value will remain the same. County staff is also projecting “modest growth” in assessed property values.

The projections are only for county government, and do not include revenues and expenditures for Arlington Public Schools. The forecast largely keeps the county’s operations and services budget the same, with the exception of expansions in transit service as laid out in the Board-adopted Transit Development Plan.

“This is a preliminary projection — it’s still early in the budget-building process,” Schwartz said in a statement. “We have additional information that will come in the next few months — including actuarial reports for our pension and retiree healthcare, state budget proposals as well as Metro’s updated financial forecast.”

Through November 22, residents can share feedback online about the FY 2019 budget, in addition to the series of public roundtables that end this week.

The county is also seeking feedback on Schwartz’s plan to spend the $11.1 million surplus from this past year’s budget between five “near-term needs,” including affordable housing, facilities studies, public safety employee compensation, a fund for “unforeseen needs” and a security system upgrade at the county’s Justice Center.

Residents can email [email protected] with comments on the plan. Those comments will then be compiled and shared with the County Board before its November meeting, where members will vote on close-out spending.