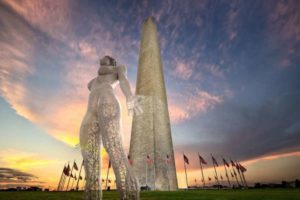 The National Park Service has denied a permit to erect a 45-foot statue of a naked, meditating woman on the National Mall near the Washington Monument.

The group behind the upcoming Catharsis on the Mall festival planned to transport R-Evolution, the statue created by artist Marco Cochrane, from San Francisco to the Mall at a cost of around $100,000.

Not that anyone has proposed it, but we were wondering whether Arlington might be a more welcoming place for the statue. If it were an option, would you support the statue being erected somewhere in Arlington?