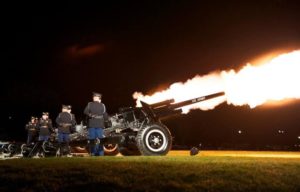 The Army’s Presidential Salute Battery will be firing a 19-gun volley of 105mm howitzer cannons from about 7-7:15 a.m. as part of a dress rehearsal for the National Veterans Day Observance on Saturday.

“Arlington County neighbors are advised to expect intermittent, elevated noise level during this time,” said a press release from Joint Base Myer-Henderson Hall.

Arlington residents frequently report hearing cannon fire from the cemetery, usually in the morning. Depending on weather conditions, the noise can be heard in various parts of Arlington or even D.C.

The full press release about Thursday’s rehearsal, below.

The Presidential Salute Battery of the 3d U.S. Infantry Regiment (The Old Guard) will execute a 19-gun volley of its 105mm howitzer cannons beginning at 7 a.m. Thursday, Nov. 9, during a full force rehearsal. The rehearsal should last between 10 and 15 minutes. Arlington County neighbors are advised to expect intermittent, elevated noise level during this time.

The battery will be set up in Arlington National Cemetery for the rehearsal in preparation for the National Veterans Day Observance set for Saturday, Nov. 11.

The Presidential Salute Battery Guns Platoon fires its cannons at ceremonies in honor of the President of the United States, for visiting foreign dignitaries, during official government ceremonies, regional celebrations (such as the 4th of July program at the U.S. Capitol), and while rendering honors during the funeral services of our nation’s fallen service members and veterans.

The members of the regiment practice to maintain the highest level of ceremonial proficiency necessary and often practice in Arlington National Cemetery between 7 and 8 a.m. on Tuesday mornings.  Arlington County neighbors are advised that during the fall and winter months, without leaves on the trees to buffer the sound, the booms of the cannons may seem louder.