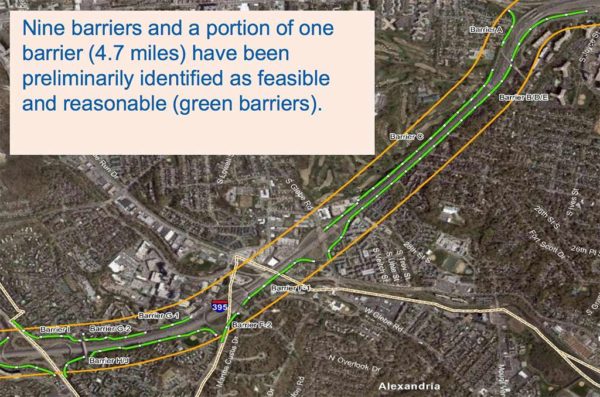 Voting is underway among some Fairlington residents on whether new sound walls should be added as part of the I-395 Express Lanes project.

Ballots have been mailed out to some neighborhood residents on whether sound barriers should be installed to mitigate the noise from the extended High Occupancy Toll lanes. The toll lanes will be extended for eight miles north from Turkeycock Run near Edsall Road to the vicinity of Eads Street in Arlington, near the Pentagon.

The first round of ballots went out to residents in the north of the neighborhood in late September.

AECOM Engineering Company is the contractor behind the sound walls, and is running the vote. An AECOM spokesman did not respond to a request for comment.

In a presentation to FCA last year, the Virginia Department of Transportation said approximately 4.7 miles of highway in Arlington is eligible for the sound barriers, in addition to 3.4 miles in Alexandria.

Residents are eligible to vote based on their proximity to the proposed walls, and the noise the highway creates. Renters vote as well as homeowners, although the votes of owners have a higher weight.

FCA’s November newsletter detailed some of the concerns residents have with the sound barriers.

“The proposed walls are 25 feet high, which will impact sight lines and sunlight for residents on lower floors,” the newsletter reads. “The walls also require 10 feet of clear space on either side, which will require the destruction of a fair number of trees and shrubs around the neighborhood perimeter. And the walls themselves may only provide five decibels of noise reduction, according to designers.”