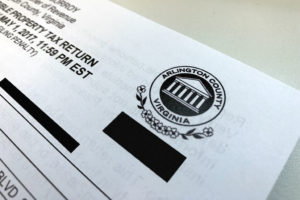 The new GOP tax bill has prompted numerous Arlington taxpayers to prepay their 2018 taxes more than a year ahead of time.

The bill, which was just signed into law by President Trump this morning, caps State and Local Tax (SALT) deductions at $10,000. For many Arlington taxpayers with pricey homes, this means they will lose part of their deduction next year and thus potentially pay higher federal taxes.

To counter that, some Arlingtonians are planning to take a higher deduction on their 2017 taxes by prepaying their property tax for future years.

Arlington County and other Virginia localities allow residents to make tax deposits. County Treasurer Carla de la Pava tells ARLnow.com that more than $1 million in tax deposits have been prepaid by 144 residents as of Friday morning.

The Treasurer’s Office has been “inundated with people trying to pay in advance” and is expecting the prepayments to continue through the end of the year, de la Pava said. The first prepayment was made by an attorney about two weeks ago, when the bill was first passed by a narrow Republican majority in the U.S. Senate.

“It’s interesting because in Arlington [prepayments] started much earlier than anywhere else in the state,” de la Pava said, noting that it “has been a really big topic of conversation” on the Treasurers Association of Virginia email listserv.

Some prepayers are depositing more than a year of taxes in advance, while others are paying whichever potion of next year’s they can afford, we’re told.

Tax deposits have been an option for many years, but the Treasurer’s Office hasn’t seen a prepayment surge like this at any point in recent memory.

“We have never seen these volumes,” said de la Pava.

Tax deposits are invested by the Treasurer’s Office in “very safe” investments, earning a small return for the county.

De la Pava is encouraging taxpayers — particularly those paying the Alternative Minimum Tax — to consult with a CPA or tax expert before deciding whether to prepay. More from the treasurer’s website:

If you are interested in prepaying your 2018 taxes, the Treasurer’s Office can accept tax deposits on active Real Estate accounts. While our office does accept tax deposits, we are not experts in federal tax law and are not able to offer any advice, guidance, or opinion on whether or not your deposits will be deductible on your 2017 federal tax returns. If you have questions about making a tax deposit on your Arlington real estate, please email us at [email protected] or call 703-228-3090.