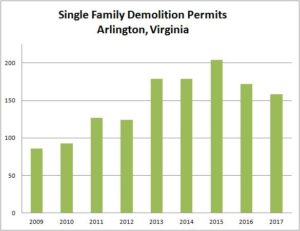 Single-family home demolitions dropped in 2017, hitting the lowest point since 2012, according to statistics from the group Preservation Arlington.

A new report from Preservation Arlington says there were 158 single-family home demolition permits issued last year, making it the second year in a row with demolition permits falling from the year prior. Demolitions peaked in 2015 at 204, according to the data.

The downward trend may seem like a “mission accomplished” moment for Eric Dobson of Preservation Arlington, but instead he thinks it reflects changing market dynamics, not a new-found interest in preserving older homes.

“I was afraid someone would ask,” he joked after being contacted by ARLnow.com.

Dobson said that the number of homes in Arlington that are attractive candidates for demolition — those that have been poorly maintained, that sit on a lot that can be subdivided, or that are worth substantially less than the underlying property — is finite and shrinking.

But there’s another trend in play that may explain why demolition permits are falling: a trend towards gut renovations that keep just enough of the structure to not be classified as a demolition under county code.

“People are getting creative as supply dries up,” Dobson wrote. For example, “someone buys a house that is on a substandard lot — a lot that has a small side yard or something that would not be permitted today. So they cannot ‘tear it down’ because they would need to meet today’s code for setback. Instead [they] keep that exterior wall that gives them more building room and tear the rest of the house down.”

“The definition of teardown somewhat hides the fact that dozens of more houses are essentially torn down,” he added. “As lots become more scarce, people are becoming innovative/creative.”

“The sale of single family marked as new construction increased slightly from 121 to 130 homes in 2017,” he said. “New construction can be considered a total demo or building on top of/expanding [an] existing foundation. I’m seeing more of this lately so it’s possible that we’re seeing fewer complete demolitions, but just as many or more new construction with higher numbers of new homes on existing structure.”

Meanwhile, it’s not uncommon for buyers to demolish million-dollar homes. There were a total of 12 demo permits issued in 2017 for homes purchased for more than $1 million, according to Preservation Arlington.