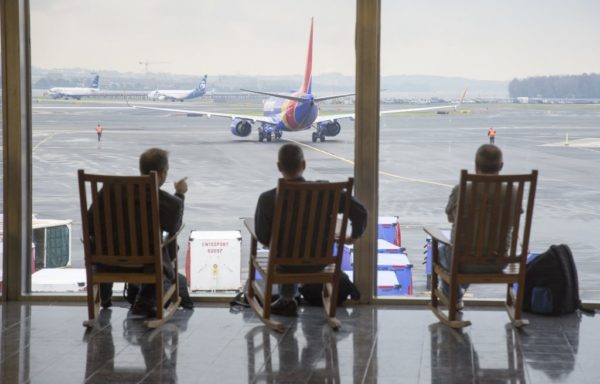 Crystal City Could Be Big Budget Winner — Commercial real estate analysts expect Crystal City and the Dulles Toll Road corridor to be the big winners from the new spending bill that was signed into law last week, boosting domestic and military budgets. Crystal City is also among the Northern Virginia locales under consideration for Amazon’s HQ2. [Bisnow]

Park Police Chief Cancels Meeting with Beyer — Updated at 12:30 p.m. — The chief of the U.S. Park Police cancelled a scheduled meeting yesterday with Rep. Don Beyer (D-Va.) and D.C. Congresswoman Eleanor Holmes Norton. Beyer and Norton are seeking answers in the fatal Park Police shooting of Bijan Ghaisar, who fled from a reported crash and then from officers before being shot in Fairfax County. USPP later released a statement explaining the chief’s decision. [WUSA 9, PDF]

Ballston to Hold Puppy Party Tomorrow — “Didn’t feel the love on Valentines Day? Join the Ballston BID for a puppy pick-me-up. All dogs present available for adoption through our partner, Homeward Trails. They bring the furry friends. Earl’s will bring the food.” [Ballston BID]

Charlie Clark on Arlington and Its History — “Clark compared the local population to the cast of the NBC show ‘Parks and Recreation,’ a group of honest, do-gooders who try their best but things still go awry. They’re a body of citizens that aren’t afraid to challenge their local governance on issues, pointing in particular to the struggle put up by local citizens last year when Arlington worked to relocate Fire Station 8.” [Arlington Connection]

A person suffered serious injuries in what’s being described by police as a single-vehicle crash in Rosslyn.

Introducing Towngate North, a new condominium residence coming soon to Old Town North. Find rooftop terraces where you can relax and take in city views along the Potomac.

A Dominion Energy substation under renovation near Crystal City is set to electrify the neighborhood with an artistic façade. The energy provider is expanding and remodeling its substation at the…

The Right Note is a biweekly opinion column. The views expressed are solely the author’s. The annual closeout process, or second round of spending, is upon us again. Tonight, the…

Read more →
More Stories
Meanwhile in D.C.Here’s Where You Can Buy Girl Scout Cookies in Arlington This Month