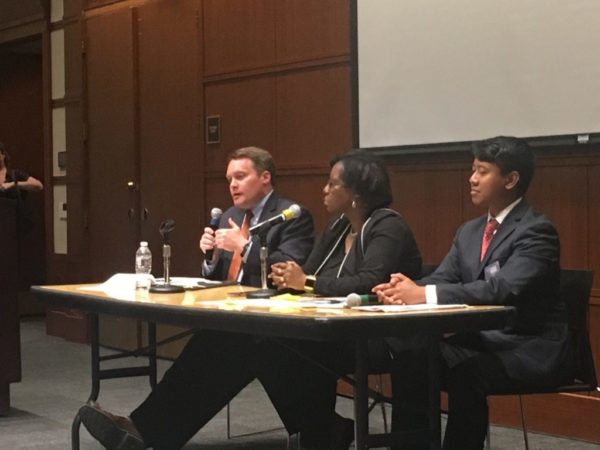 The two contenders for the Democratic nomination for Arlington County Board spent most of their May 2 debate in agreement on a wide range of issues — with one gondola-sized exception.

Chanda Choun and Matthew de Ferranti took turns emphasizing the need for more affordable housing and economic development in the county during the forum, which was held in Ballston and hosted by the Arlington County Democratic Committee. Both Democratic hopefuls had plenty of criticisms of the record of the man they’re hoping to knock off this November: County Board member John Vihstadt, an independent.

The rare policy divergence between the two came on a question about whether they’d support using county funds to help build the oft-discussed Rosslyn-Georgetown gondola.

De Ferranti, a lawyer and Democratic activist who’s racked up endorsements from a whole host of elected leaders, adopted the more cautious stance of other county officials and suggested that he’s “fairly wary of moving forward” with the project.

By contrast, Choun — a cybersecurity professional and U.S. Army reservist — borrowed a phrase from the ARLnow comment section to declare: “Gondola now!”

“I know it sounds silly, but I don’t think we should just write it off,” Choun said. “I don’t think there’s any harm to continue exploring this proposal.”

Choun pointed to previous studies of the project suggesting that it could ease the connection between Rosslyn and Georgetown by helping people bypass the Key Bridge, adding that the gondola could also increase access to the Rosslyn Metro station for Georgetown residents.

Yet de Ferranti said he’d much rather support Metro more directly via continued county’s financial support of the troubled transit system. He also noted that many local officials fear that Virginia’s recent deal to provide dedicated annual funding to Metro could pull badly needed money away from regional road projects.

“We have to preserve our existing bus routes and the transportation we have now,” de Ferranti said. “I just don’t think now is the right moment for us to get the gondola.”

But neither Choun nor de Ferranti will get a chance to weigh in on the issue at the board level if they fail to best Vihstadt, who became the first non-Democrat to win a seat on the County Board in 15 years back in 2014, and both candidates argued forcefully that they can topple the incumbent.

Choun attacked Vihstadt for, allegedly, being reflexively against growth and development in the county. De Ferranti said Vihstadt is so concerned with the idea of “fiscal restraint” that he’s opposed needed investments across the county.

Choun and de Ferranti differed on how they’d go about beating Vihstadt, who won with an unusual political coalition stretching from the county’s GOP to its Green Party.

“We need to acknowledge: this is a decent person,” de Ferranti said. “We have to relate and then persuade.”

De Ferranti leaned on his experience in county politics to suggest that he has the background to persuade Vihstadt’s backers, frequently pointing to his work on a variety of county advisory committees and with other Arlington leaders to demonstrate his community credentials.

“I’ll be detailed and I’ll be relentless,” de Ferranti said. “We need to return to our roots here.”

Choun, however, suggested he could bring more of an outsider’s perspective to the race. He conceded that he doesn’t have any endorsements and that his decision to jump into the primary “might have rubbed people the wrong way,” but he expects his unique perspective as a first-generation Cambodian immigrant will help him draw a stark contrast in the general election.

“We’re a diverse county now, so we need someone who can relate to the most people,” Choun said. “People want to see someone who is offering and calling for a change.”

Voters will pick the Democratic nominee on June 12. Arlington Republicans will decide whether they’ll run a candidate by May 23; Heitham Ghariani, an IT worker at the federal Office of the Comptroller of the Currency, has also filed to run as an independent.