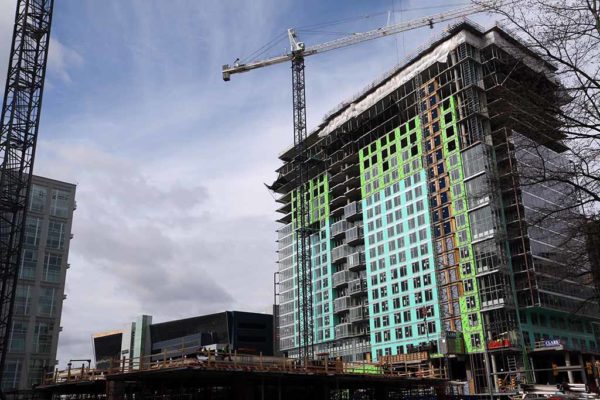 If large new developments are going to put a strain on Arlington’s schools or eat up more of the county’s green space, why doesn’t the county require developers to chip in some cash to offset those impacts?

It’s a question on the minds of many Arlingtonians, particularly as the county grapples with budget cuts and increasingly overcrowded classrooms. “Peter’s Take” columnist Peter Rousselot even addressed the issue in his May 3 opinion piece, urging county leaders to require that any developer looking to add density to a property through a zoning change first send Arlington money (or even land) for schools and parks.

But county attorney Steve MacIsaac says Arlington isn’t likely to adopt Rousselot’s recommendations any time soon. He believes there’s a lot of nuance that often gets missed in discussions of the issue, starting with the fact that Arlington generally secures money from developers for things like nearby transportation improvements during any negotiation over new construction.

“Think about widened sidewalks and streetscapes you see, new Metro station entrances, things of that nature,” MacIsaac told ARLnow. “The goal of Arlington has been to try to make great places, and that will cause businesses to want to locate here, and then they generate a large amount of tax revenues to offset the cost of other services it has to provide. So if we flipped things around, the county would have to pay more for creating the great place… Things developers pay for now, wouldn’t be paid for, and the county would have to pick up those costs.”

MacIsaac notes that state law limits local governments from exchanging cash or donated land for schools, roads or parks for zoning changes, a process commonly referred to as the “proffer system.” In fact, many other localities across Northern Virginia have chafed at the current state framework for proffers, after a 2016 change to state law set new strictures on what local governments can ask developers to pay for.

MacIsaac points out that Arlington has largely been immune from those headaches, as the law still allows local officials to extract various concessions from developers — from public art contributions to affordable housing commitments to transportation improvements — if they build through the site plan process. (The 2016 changes exempted projects in certain areas, including those around Metro stations.)

Yet MacIsaac believes the proffer law does illustrate the way state lawmakers in Richmond view this issue, and why the county remains broadly limited in how it dictates terms to developers.

Rousselot writes in his column that no state laws or county ordinances “expressly prohibit Arlington County from requesting a reasonable cash or in-kind contribution from a developer as a condition to address these kinds of schools and parks impacts,” and MacIsaac concedes that this point is largely accurate.

Yet he believes moving to such an approach would not only deprive the county of the contributions it currently wins from developers — MacIsaac points out that builders typically pay for everything from transit improvements to public art — but would also fail to make the sort of impact Rousselot and others envision.

MacIsaac says that the construction of large new apartment buildings attract most of the attention from people worried about the impact on county schools, but he believes the practice of replacing small, single-family homes on large lots with multiple new homes tends to drive most of the strain on Arlington’s classrooms.

Since that sort of development tends to be classified as “by-right,” requiring minimal approvals from county officials, MacIsaac says the county can’t require developers to chip in for parks and schools on those projects, even though “that’s where largest impact comes from.”

“That can be counterintuitive,” said County Board Chair Katie Cristol. “You know your kids are in trailers and their classrooms are overcrowded, and simultaneously you see high rises going up in Ballston and Clarendon, and one seems to follow the other. It’s one of those issues in growth that we’re always talking about.”

At the very least, however, Rousselot would like to see this debate move more into the open.

In his column, he urged MacIsaac to release “a detailed public explanation” of his rationale on the subject, “so that independent legal experts can examine his reasoning.” MacIsaac says he has written a legal opinion for the County Board on the subject, though the Board has so far declined to release it publicly, as it contains some discussions of legal matters the county would rather not share.

But MacIsaac says the Board is currently considering releasing some version of his memo, perhaps with sections redacted, given the public interest around this topic.

“The Board understands the issue and wants to show the public they’re thinking about this,” MacIsaac said.