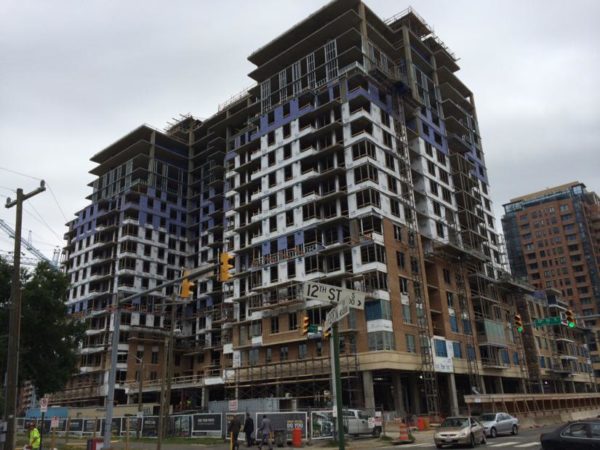 In Arlington, when a developer wants to redevelop a property to replace it with a bigger, taller building, the county often receives funding for affordable housing, transportation, streetscape improvements and public art. These “community benefits” from the developer are usually worth millions of dollars.

None of it goes directly to Arlington’s public schools, facing a capacity crisis with no end in sight.

The reason, according to officials, is Arlington’s development approval process, which was codified more than 50 years ago. Builders apply for site plans, and, by state law, community benefits from site plans can only legally be used “to mitigate immediate impacts,” according to County Attorney Stephen MacIsaac.

While a public art contribution is considered an immediate impact for a large apartment complex, for instance, a contribution to schools is not.

What the county is allowed to negotiate are “amenities that are contained within the project, like streetscape improvements, public art, the appearance of the building in general,” MacIsaac told ARLnow.com. “That system does not allow for charges for schools or public safety or running the libraries.”

In neighboring, suburban jurisdictions, developers negotiate benefits like these through the proffer system. In Loudoun County, which has opened 12 new schools in the last five years, the government pegs school costs as high as $37,791 per single family unit, and $11,294 per multifamily unit. Through proffer negotiations, Loudoun asks developers to pay for 100 percent of the estimated capital intensity factors, which includes roads and public safety, according to Loudoun Assistant Director of Planning and Zoning John Merrithew.

The number is typically lower after developers contribute state-mandated affordable housing funds, Merrithew says, but he gave the example of a recent, 70-townhouse development where the builder paid the county $1.3 million, 60 percent of which went directly to school funding. The system works, Merrithew said, because much of the development comes from previously undeveloped land.

“We don’t use the world redevelopment here,” Merrithew said, “because we have very little of it. Most of it is greenfield development.”

Sometimes, developers contribute chunks of land for a new school site. More frequently in the last decade, Merrithew said, Loudoun has bought land from private landowners to build schools. Acquiring land for public uses, including schools, is one of the recommendations the county’s Long Range Planning Committee made last week in evaluating the “Public Land for Public Good” initiative.

The county argues the site plan and special exception system in place has been a major driving force behind Arlington’s transformation over the past half-century, from sleepy suburb to dense urban hub.

“Not only has this zoning structure and this development process worked well in creating today’s Arlington, it’s also resulted in one of the best school systems in America,” Arlington County Board Chair Jay Fisette said. “If we would have to undo our current structure to be able to replicate what’s done in Loudoun, I think that would be ill-advised. There’s no easy fix for the school growth, but we will address it with the School Board, and we always have.”

There could be some room for debate, however, that the current policy prohibits all funding for schools and other public works. As an example, the proposed 29-story, 393-unit apartment building at the corner of Wilson Blvd and N. Randolph Street in Ballston is expected to draw a large sum of community benefit money. Fisette and MacIsaac believe none of that money can legally be spent on schools, but MacIsaac didn’t draw a hard line.

“That’s a tough legal question,” he said. “The kinds of impacts that are typically recognized in the courts in Virginia and throughout the country are much much more immediate impacts, like on the surrounding streets and neighborhood. It does not typically involved secondary and tertiary impacts like government services.”

Another way Arlington has been able to get additional funds from developers is through the transfer of development rights. Fisette called it “a great tool” to promote development “where you want it,” and the County Board received $15 million from Vornado from TDR when it approved the massive PenPlace development in Pentagon City. That money was allocated to offset costs of the now-dormant Long Bridge Aquatics Center project, which was to be located on the site where the development rights were transferred from.

It’s unclear if TDR can be used to direct funding to schools. Bob Brosnan, the county director of Community Planning, Housing and Urban Development, said there had been “no discussion until recently” about using developer funding for the school system because “it’s not clear that the need is related.”

Some residents, however, have been expressing concern about the impacts of new development on the burgeoning school system. Many who have written to or spoke before the County Board about recent apartment and condominium site plans have worried about the added strain on local schools.

While single-family homes continue to account for the majority of school enrollment — 55 percent — multifamily homes like apartments, condos and townhouses account for a still-significant 45 percent of enrollment, according to recent Arlington Public Schools data.

As the school system continues to boom with growth and more and more facilities become overcrowded, the discussion may not die down soon.