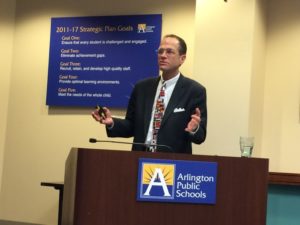 Murphy recommended moving the H-B and Stratford programs to a new, 900-seat facility at 1601 Wilson Blvd and renovating the Stratford building they currently occupy on Vacation Lane into a 1,000-seat middle school.

If the School Board were to take Murphy’s recommendation, it would mean at least 1,197 additional middle school seats — between H-B, Stratford and the new middle school — by September 2019. APS projects the capital projects could cost as little as $114.5 million, which would free up $11.5 million to build 300 seats in expansions at existing middle schools.

The School Board’s adopted Capital Improvement Program stipulated that the secondary seat plan for 2019 build 1,300 additional seats for no more than $126 million. The “high” estimate for the two projects, according to APS, comes in at $147.2 million — which would be over budget and below the number of seats required, as it would not allow the 300 seat expansion at existing schools.

Murphy recommended what APS referred to as the “SWE3” option, one of six the School Board and APS are mulling. All of the options still on the table involved some combination of work at either or both of the Stratford and Wilson sites. The SWE3 option is the only option with a “low” cost estimate below $126 million and with a seat expansion of more than 1,100. 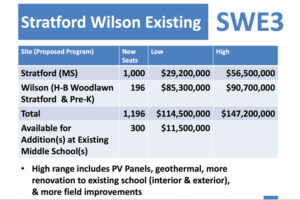 The other options that would have provided more seats than Murphy’s recommendation were: moving H-B and Stratford to the Wilson school and building a 1,300-seat neighborhood middle school on Vacation Lane (the SW option) and building a 1,300-seat secondary school at Wilson. The Wilson plan is projected to cost more than $126 million and the SW option’s lowest cost estimate is $126 million, leaving no financial flexibility, despite adding 1,497 seats.

Previously, APS was considering moving H-B Woodlawn to the Reed School/Westover Library site, but staunch community opposition and losing the location as a possible future elementary school eliminated it from contention earlier this month.

The School Board will conduct a public hearing on the secondary school capacity on Dec. 3 before voting on its plan Dec. 18.