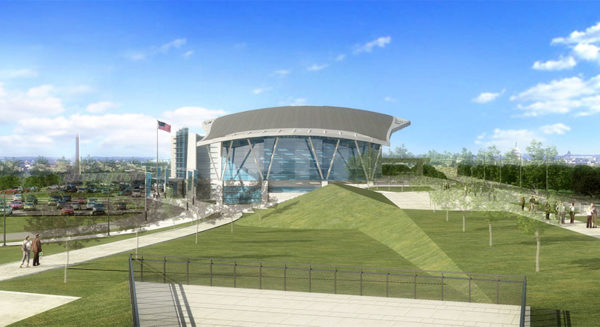 (Updated at 3:45 p.m.) Arlington will not award a contract for construction of the Long Bridge Park Aquatics, Health and Fitness Facility, delaying the project for at least a year, the county announced this afternoon.

The decision to cancel the bids for the facility follows an effort by County Manager Barbara Donnellan and her staff to work with construction companies to “value engineer” the project and lower costs. The bids initially came in well above the level necessary to keep the aquatics center within its original $79 million projected cost. Even with cheaper furnishings and other cut corners, however, we’re told the revised cost estimate “got close but not close enough.”

With $42.5 million in bond funding and a $15 million developer contribution already in place, that puts the County Board in a position in which it must approve additional taxpayer funds, scale back the design of the facility, or seek private funding. For now, the county will seek private funds.

County Board Chair Jay Fisette said the aquatic’s center design resulted from an extensive community outreach process that took into account its location near the Potomac River, within view of I-395 and major D.C. monuments.

“This facility resulted from [a community needs assessment] and then took several years to design,” he said. “I still think that to fulfill that plan is the right way to go. But I understand that staying within the previous budget is also appropriate.”

Fisette said the county will now seek funding from a private entity. Possibilities include a corporate sponsorship and naming rights, working with a for-profit operator, or partnering with a university or other institution.

Kettler Capitals Iceplex in Ballston is one such facility built by the county but operated by a rent-paying, for-profit entity. The fields at Long Bridge Park and Barcroft Baseball Field #6 are partially paid for under partnerships with Marymount University and George Washington University, respectively.

A corporate sponsor may be interested in the naming rights to the facility, especially given its high-visibility location. Fisette said he’d be open to having the facility known as the Under Armor or the Nike Aquatics, Health and Fitness Facility, among other potential sponsors.

“The goal is to identify any balance of funding beyond those already approved by the voters,” Fisette said. “This is an unusual and exceptional opportunity for someone who would like to have that visibility.”

What might make the opportunity more exceptional, according to county officials, is D.C’s bid to host the 2024 Summer Olympic Games. Later this month, the United States Olympic Committee is expected to narrow down the list of U.S. cities being considered as an Olympic host. Should D.C. be on that list, it could give a boost to the effort to attract sponsorships, given that the new aquatics center is likely to be one of the facilities used for the games.

“We are under the impression that as they move forward with their bid, that this site is included in their plans,” according to Fisette.

The county will “aggressively pursue private funding support” over the next 6-8 months, Fisette said. Donnellan plans to report back to the County Board in mid-2015, prior to any additional bonds being sold. Should attempts to find private funds prove unsuccessful, the next steps for the facility are “yet to be determined.”

The county press release on the announcement, after the jump.

Arlington County Manager Barbara Donnellan announced today that the County will not award a contract for construction of Long Bridge Park Phase 2, which includes the Aquatics, Health and Fitness Facility (the “Facility”) and 8.5 acres of park.

“Last January I said that we would conduct extensive due diligence to ensure that the project estimate was sound and within the available budget, and that’s exactly what we did,” said Donnellan. “I have concluded, in consultation with the County Board, that the gap between our construction budget and the lowest bid is simply too great to bridge at this point.”

After thoroughly reviewing the project budget to look for cost savings and holding a series of discussions with the lowest bidder, the County has found that the community’s vision for the park could not be implemented within the current budget.  As a result, the County has cancelled the bid and postponed Phase 2 construction; the move does not require County Board action.

Planning for various phases of Long Bridge Park have been underway for more than a decade.  In December, Arlington received bids for construction of Phase 2 that were higher than expected.

This was unexpected, as the County had taken the extra step of contracting with an engineering firm to review design and construction documents to provide independent, third-party cost estimates, which were within the reasonable range of the County Architect-of-Record’s estimates.

After three months of serious discussions with the lowest bidder, the County determined that it was impossible to bring the bid within the County’s budget without sacrificing too much of the intent of the design and programing of the project.

Over the next six months, Donnellan and her staff will seek potential partnerships and sponsorships – including naming rights opportunities — to further leverage private sector investments to move this project forward. She plans to come back to the County Board in mid-2015, prior to any additional bonds being sold, with an update on the project and her recommendations.

Long Bridge Park is a strategic investment that will provide a range of health, fitness and recreational opportunities for generations. The County remains committed to delivering all phases of the project as foreseen in the Long Bridge Park Master Plan, adopted by the County Board In 2013. “We are moving ahead with the design of the 6th Street South entry and play features adjacent to Fields 3 and 4 (Phase 3A),” said Donnellan. Construction is anticipated to be completed in 2015.

“We still believe that the Aquatics, Health and Fitness Facility, as well as the additional parkland planned for Phase 2 development, are important elements of the County’s revitalization of Crystal City,” Donnellan said. “We are not asking Arlington County taxpayers for more money to build the Facility. Instead, we will be aggressively pursuing opportunities to partner with the private sector to finish Phase 2 of Long Bridge Park.”

She noted that the United States Olympic Committee is expected, later this month, to identify the short list of cities it will consider to become the U.S. bid for the 2024 Summer Games. The Washington, DC metro area is under consideration and Long Bridge Park is expected to be part of the plan. This sort of creative partnership is an example of the type of options the County is looking to pursue.

END_OF_DOCUMENT_TOKEN_TO_BE_REPLACED

More Stories
Mark Levine: Why You Should Vote for MeCrime Report: Robbery Foiled by Armed Victim