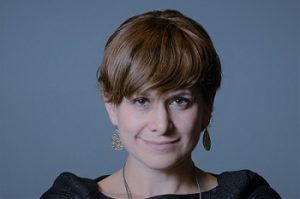 Tracy Gabriel, a D.C. urban planning official who formerly was a vice president of the New York City Economic Development Corporation, has been hired as the new president and executive director of the Crystal City Business Improvement District.

Gabriel joins the BID as Crystal City is poised for a “dynamic transformation.”

Though saddled with a high office vacancy rate following the loss of large government and military tenants, Crystal City is among the leading contenders for Amazon’s second headquarters, known as HQ2.

Even if Amazon goes elsewhere, Crystal City, Pentagon City and Potomac Yard are set for significant growth — plus $2 billion in private investment and $1.5 billion in public infrastructure projects over the next decade — which will help it become “the largest walkable downtown in Virginia and of similar scale to major U.S. downtowns such as Indianapolis and Austin,” according to a press release (below).

Meanwhile, an expansion of the Crystal City BID to include adjacent Pentagon City is under consideration.

More on Gabriel’s hiring, via a BID press release, after the jump.

The Board of Directors of the Crystal City Business Improvement District (BID) announces that Tracy Sayegh Gabriel has been hired as the new president and executive director of the organization. She will begin at the BID in August.

A nationally recognized urban planner and city-builder, Gabriel brings 15 years of planning, development, and place-based economic development experience in government and private consultancy in the Washington, D.C. and New York City markets. She is former vice president at the New York City Economic Development Corporation under the Bloomberg Administration overseeing neighborhood transformations and managing large-scale public projects. She is  currently associate director at the District of Columbia Office of Planning, where she has led a design-forward, equity-driven planning practice since 2012 including neighborhood plans and place-making throughout the District and directing Anacostia Waterfront development. Her work has typically focused on mixed-use development and neighborhood revitalization, integrating real estate, infrastructure, and capital planning initiatives.

“Hiring Tracy is a strategic move to continue the exciting momentum underway in Crystal City, Pentagon City, and Potomac Yard – Arlington,” said Glenda MacMullin, Crystal City BID Board Chair and chief operating officer and chief financial officer at Consumer Technology Association. “Now is a pivotal time in our organization’s trajectory. We’re so thankful for the comprehensive, collaborative and strategic work that Rob Mandle and Rich Bradley have been doing, and we believe Tracy will help take the Crystal City BID and our entire area to the next level.”

The Crystal City Business Improvement District (BID) is now several months into a multidimensional strategic planning process exploring the nature of the greater submarket that includes Crystal City, Pentagon City, and Potomac Yard – Arlington. The process, called the Future Cities Project, has been led by Rich Bradley of The Urban Partnership serving as the BID’s acting executive director, and Rob Mandle, the BID’s chief operating officer. The process has included an extensive community outreach effort, both in person and online, and is guided by a Steering Committee drawn from the BID’s Board of Directors, civic associations, businesses, and arts groups, and major property owners in the Pentagon City and Potomac Yard areas, along with other public and civic sector leaders and officials. The process will result in an Action Agenda to be released this fall that will drive the area towards becoming a more dynamic, urban, and walkable place.

This greater submarket is the largest walkable downtown in Virginia and of similar scale to major U.S. downtowns such as Indianapolis and Austin. With new private investment totaling $2 billion is in the pipeline and another $1.5 billion in public infrastructure projects slated for the next decade, Crystal City, Pentagon City, and Potomac Yard are poised for a dynamic transformation which will be supported by the BID’s strategy and leadership.

“I am excited about the opportunity to work with the Board, as well as the County, residents, businesses, and other stakeholders, to support the repositioning of Crystal City. The sheer scale of what’s happening in the Crystal City area right now will have an impact on the entire region,” Tracy Gabriel said. “I am looking forward to rolling up my sleeves to work at this important nexus of design, planning, economic development, and revitalization with the great team that’s already in place.”

While vice president at the NYC Economic Development Corporation, Gabriel was responsible for high-profile development projects and neighborhood-wide initiatives, including the transformation of Long Island City, now the fastest growing neighborhood in New York City, and the development of Hunter’s Point South, one of the most innovative urban waterfront projects. She also served as a consultant on various real estate, downtown, and revitalization projects at Phillips Preiss Shapiro Associates. Gabriel earned a degree from George Washington University, received her Master’s in City Planning from the Massachusetts Institute of Technology, and was a Fulbright Scholar in economic development in Damascus, Syria.