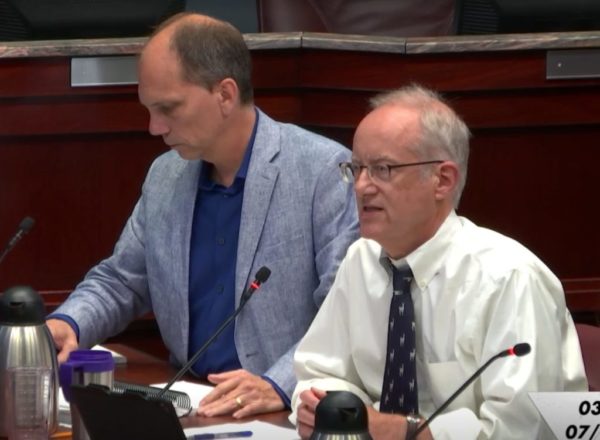 Amid concerns about deep cuts on the way for the Neighborhood Conservation program, the County Board is kicking off a new effort to identify some potential reforms.

The Board decided Tuesday (July 10) to direct County Manager Mark Schwartz to draw up a process for studying the program in more depth over the next two years or so, in order to better understand how it can become more efficient and see where it might overlap with other county efforts.

“By adopting this, we’re saying, no, we’re not looking for a slow, or any kind of, death [for the program],” said Board member Erik Gutshall. “But we’re taking a moment here to hit the reset button and double down on the program, to invest the time and staff resources to study remaking the program to meet its original goals.”

Neighborhood Conservation was formed in 1964 as a way for communities to lobby for money to complete modest infrastructure projects, like new sidewalks or landscaping, but Schwartz targeted it for hefty cuts in his proposed 10-year Capital Improvement Plan.

In all, the program is set to lose $24 million over the next decade, leaving $36 million in its coffers to finish out existing projects selected for funding between now and 2028. Some civic association leaders have charged that such a steep cut amounts to killing the program in its entirety.

Others in the community have countered that the program may very well need to end, considering that the cost of projects funded through Neighborhood Conservation have shot up in recent years.

Tuesday’s decision by the Board essentially represents a middle ground between those two positions. The county’s tight financial position means it likely won’t be able to avoid some steep cuts to the program, but Board members also believe they can pursue some changes to Neighborhood Conservation to ensure its long-term viability.

“Hopefully, this keeps faith with the communities, while at the same time acknowledging the reality that the program has had some challenges,” said Board member John Vihstadt.

Vihstadt hopes the review of the program will provide a “holistic, countywide perspective,” including whether the county might be better served by directing Neighborhood Conservation funding to its “Complete Streets” program instead.

Schwartz is set to establish a working group and lay out a timeline for a review process by Sept. 30, with the ultimate goal of having results in hand by the time the Board reviews its next CIP in 2020.

In the near term, Board Chair Katie Cristol suggested sending a smidge more money to the program as “a show of faith.” County staff managed to earn an unexpected $1 million in state funding for some construction at one of Arlington’s group homes for adults with disabilities, and Cristol suggested using the savings to fund one additional Neighborhood Conservation project.

Yet the Board has plenty of other pressing needs left unaddressed by a challenging CIP, and Cristol’s colleagues didn’t immediately sign off on such a change.

The Board is set to finalize the CIP when it reconvenes Saturday (July 14).