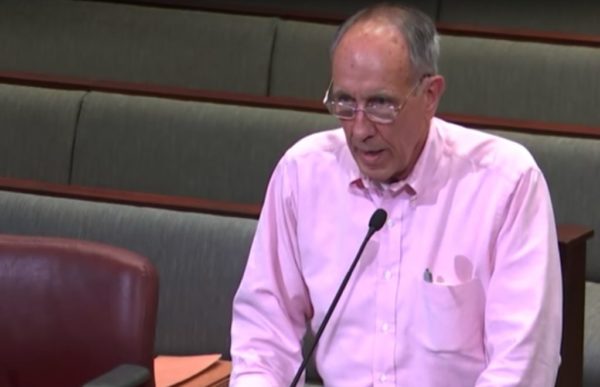 County Manager Mark Schwartz is proposing slashing $24 million from the program’s funding over the next 10 years as part of his new Capital Improvement Plan, dropping its coffers down to $36 million through 2028.

Neighborhood Conservation has long helped dole out money for modest community improvements, like new sidewalks or landscaping, yet the county’s grim budget picture convinced Schwartz to target it for some hefty cuts. That prompted several community activists and managers of the program to lobby the County Board to restore that funding at a public hearing last Wednesday (June 27).

County staff say that these proposed cuts would mean that projects already in line for funding will still move ahead, but any new applications from neighborhoods will go on the back burner. Accordingly, Phil Klingelhofer, deputy vice chair of the program’s advisory committee, believes that such a delay would mean that any “neighborhood with a recently proposed project should expect to wait 15 to 30 years for a project to come to the top for current funding.”

“If you decide to accept this… we recognize this is really the end of the program, and at that point, you should take the final step and end the program permanently,” Klingelhofer said.

For some in the community, that doesn’t sound like such a bad idea. Some activists have started arguing that the program has outlived its usefulness, including columnist Peter Rousselot, who points out that it can already take five or 10 years for a project to move through the Neighborhood Conservation process.

County Board member John Vihstadt has similar concerns about the program’s efficacy, noting that those delays are often driven by “quality control or monitoring issues” with the county switching contractors for some projects two or three times each. That’s why he sees this CIP process has a chance to reform the program, and “mend it, not end it.”

“Things are not good right now, and we’re looking at what we’re going to do,” Vihstadt told ARLnow. “If we’re going to fund the program, it needs to be modified and reformed.”

Braswell and Klingelhofer both told the Board at the hearing that they’d be willing to study ways to make the program run more efficiently, particularly if the alternative is steep funding cuts.

For his part, Rousselot proposed shifting its functions to the county’s Department of Parks and Recreation or using the county’s “Complete Streets” program to fund such improvements. He believes those changes would make the process more equitable, as he feels the program currently is skewed toward neighborhoods with active civic associations that have the time and manpower to incessantly lobby county staff.

But Sarah McKinley, president of the Columbia Heights Civic Association, argued that the whole point of the Neighborhood Conservation program is to provide communities with a direct line to the county when it comes to these infrastructure projects. Should the Board follow Rousselot’s recommendations, McKinley expects people will quickly become disconnected from plans for construction in their neighborhoods.

“You’re going to bear the brunt of all the citizen outrage over the county digging up their azaleas to put in a sidewalk,” McKinley told the Board. “That’s why it was created: to allow a process for fulsome civic engagement.”

The Board will review the CIP, including the Neighborhood Conservation cuts, once more on July 10, then vote on the plan on July 14.