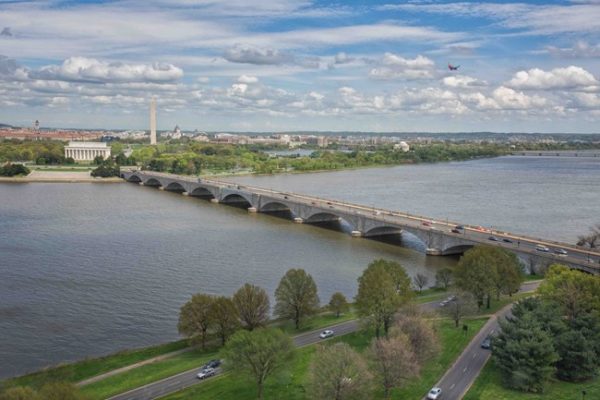 Plans are underway to address Arlington Memorial Bridge’s crumbling facade and deep structural issues, but over the next week it will mean extra traffic for morning commuters across the bridge.

The parkway will also see late evening closures over the coming week to prepare the bridge for rehabilitation later this fall. From Wednesday, Aug. 15 until Sunday, Aug. 19, one northbound lane of the parkway will be closed south of Memorial Circle, near the Potomac River. Closures will start at 7 p.m. and end at 5 a.m.

Cyclists and pedestrians on the Mount Vernon Trail may also experience delays during this process. While the trail won’t close, the equipment will be passing over the trail and workers onsite will be directing traffic on the trail.

The full bridge rehabilitation later this fall will reduce the bridge to three lanes of traffic: one eastbound, one westbound, and one that will shift to accommodate rush hour traffic.

In 2016, the Federal Highway Administration informed the National Park Service (NPS) that, without repairs, the bridge will require full closure in 2021. According to NPS, the current schedule of closures will help strengthen the bridge; adding new concrete to the roads, reinforcing the rusted steel drawbridge, and making repairs to the underside of the road. The full rehabilitation later this fall will replace the drawbridge span, replace most of the concrete across the bridge with prefabricated concrete panels.

The NPS is also closing lanes on the Windy Run Bridge to keep up with additional bridge rehab needs, with work running through the fall.