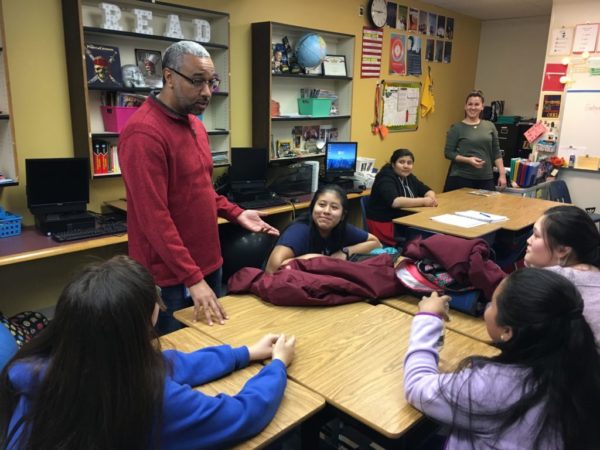 One was the surprise announcement by Virginia Secretary of Education Atif Qarni that Cotman was chosen as “Teacher of the Year” for the state’s Region 4, covering all of Northern Virginia.

The other was that his daughter was being born.

Cotman is an English teacher at Jefferson Middle School and the school’s minority achievement coordinator, a specialist in working with minority students to close the achievement gap in public schools. Cotman has been working in APS for 22 years, both with students and behind the scenes developing training for staff.

Cotman’s daughter was born at 5:30 a.m. and so was unable to attend the assembly held at the school, but FaceTime’d in to receive congratulations from Qarni and the students and staff of Jefferson Middle School.

In April, Cotman was chosen as Arlington’s Teacher of the Year. The award particularly noted the effort he put not only into teaching, but into coaching, facilitating, mentoring and parent outreach.

Cotman is one of eight teachers from regions across Virginia under review next week to be selected for Virginia’s Teacher of the Year award. An announcement is expected to come Sept. 14. The winning teacher will then be put forward by Virginia for the National Teacher of the Year program.

Should Cotman win statewide, he’d follow in the footsteps of Wakefield High School’s Michelle Cottrell-Williams, who won in 2017.