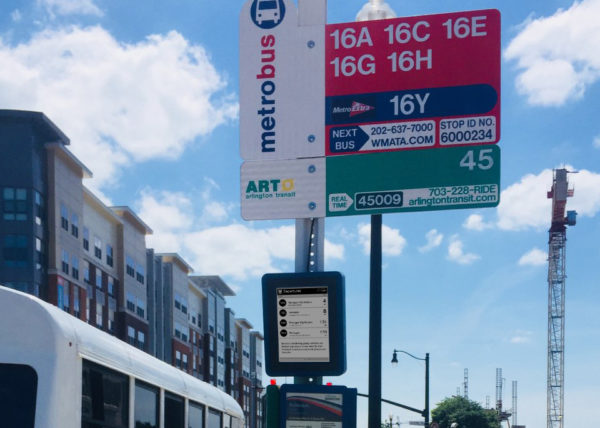 (Updated at 5 p.m.) Metrobus has added real-time bus tracking displays to a bevy of its stops along Columbia Pike, one of many changes coming to the corridor’s bus service in the coming months.

The California-based company Connectpoint announced earlier this month that it’s working with WMATA to install the devices, which will display wait times for various buses, route maps and even alerts about service disruptions.

The new screens will be available at stops along the pike at the highway’s intersections with the following roads:

The company says it will also install the displays at several stops around Annandale as well, for a total of 24 in all. Metro spokesman Ron Holzer told ARLnow four are already in place as part of a “pilot program” the transit agency is running, with the remaining displays to be installed “in the next two weeks.”

“If the pilot is successful, we hope to deploy signs at all Metrobus stops,” Holzer said.

Arlington transportation spokesman Eric Balliet added that WMATA first installed the technology as part of some long-awaited work to beef up bus service on the pike this summer.

For now, Balliet expects the devices will only display “next bus arrival times” for the Metrobus 16 line, the primary focus of service changes that started in late June.

However, Balliet added that the county “anticipates removing” the devices when it can finalize plans for new bus shelters on the pike. Those have been the subject of plenty of scrutiny over the years, particularly after one stop was revealed to have a price tag north of $1 million.

The county put out a request for proposals for those pike bus stops in June, with the goal of starting work on five sometime this winter. Arlington hopes to eventually install 23 of the “transit stations” along the pike.