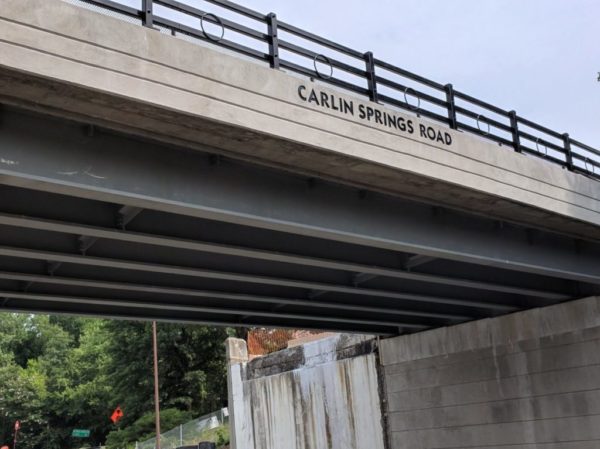 The Carlin Springs Road Bridge construction has passed the halfway point, and some more road closures are on the way as work wraps up.

The southern half of the replacement bridge is now in use with one lane of traffic open in each direction. Pedestrians are directed to use the walkway on the southern side of the bridge.

Work has begun on rehabilitating the north side of the bridge. Starting tomorrow (Saturday), the contractor is scheduled to install steel beams to allow construction on the remainder of the new bridge deck. During this time, N. George Mason Drive will be closed where it passes under the bridge.

The current traffic pattern will remain in place until the rest of the bridge deck is completed. Construction is expected to be completed in early 2019.

Meanwhile, the new sanitary sewer main at the N. Carlin Springs Road and N. Abington Street intersection has been completed. Street pavement and other restoration work is expected to be completed by late fall 2018.

The original Carlin Springs Road Bridge was demolished in December 2017 after it was found to be substantially deteriorated. The new bridge will feature wider sidewalks, bike lanes, and four vehicle travel lanes.