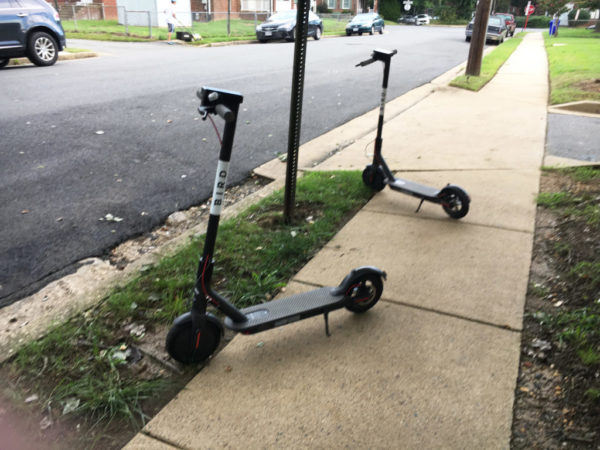 Arlington officials will soon allow dockless vehicle companies to operate up to 750 electric scooters and bikes in the county over the next nine months, reversing earlier plans to set a much lower cap on the vehicles as part of a new pilot project.

Starting next week, companies will be able to participate in the “demonstration project” the County Board unanimously approved Tuesday. While an earlier version of the program called for a cap of 350 vehicles per company, the Board ultimately opted for a much larger limit over concerns that a smaller cap would stymie the success of the dockless vehicle firms.

Bird first dropped its scooters in the county in June, becoming the first company to cross from D.C. into Arlington, but that move caught county officials a bit flat-footed. Arlington decided against retaliatory action on that front, choosing instead to launch the nine-month pilot to better evaluate how it manages the bikes and scooters going forward.

“I’m really proud that we’re not going to react to this major change to our transportation network in a kneejerk way,” said Board Chair Katie Cristol. “We’re going to do it through data.”

The program will set some new standards on dockless companies, forcing them to pay $8,000 for a permit to participate, post a “surety bond” in case they go out of business and share ridership data with the county. It will also require them to remove an improperly parked bike or scooter within one hour from 8 a.m. to 9 p.m. each day.

But the top issue the Board hopes to suss out as part of the pilot is just how many dockless vehicles Arlington can realistically handle.

Cameron Kilberg, senior manager of government affairs for Bird, told the Board that her company already had 500 scooters in the county, with each one averaging roughly three trips per day. County staff initially only expected to allow companies to reach the 350 vehicle cap if they could demonstrate a six-trip average per day, strictures Kilberg warned would hurt Bird’s ability to operate in Arlington. The county’s Transportation Commission also urged against the lower cap in a letter to the Board.

Some dockless companies have already pulled out of D.C., citing the city’s 400 vehicle cap, and the Board feared a similar development in Arlington if they mirrored that approach.

“What would be the goals of a pilot coming in at a scale lower than what you’re actually seeing on the ground?” said Vice Chair Christian Dorsey.

Even still, transportation staffers told the Board that they’re wary of just how many vehicles could show up in the county all at once.

For instance, commuter services bureau chief Jim Larsen pointed out that Skip, another dockless company operating in D.C., told him that they envision deploying 500 vehicles to the county right away in the near future. He added that he foresees as many as 10 companies applying as part of the new pilot program, meaning the county would soon be awash in thousands of the vehicles.

“Those jurisdictions that don’t have a cap have run into problems, and in some cases have had to entirely pull back, pull all the devices off the market and start over,” said county transportation chief Dennis Leach. “We don’t feel that’s a good way to move forward.”

Yet Board member Erik Gutshall pointed out that if the 350-vehicle cap forced companies to leave the county, “we could find ourselves midway through the pilot, and our hands are tied.” That’s why the Board ultimately decided to allow dockless companies to immediately deploy 350 bikes and scooters, then apply for an increase of 50 vehicles each month over the duration of the pilot, so long as they can prove they’re being ridden three times each day.

Dorsey added that an increase in the number of scooters and bikes might also force companies to deploy the vehicles beyond just the heavily trafficked Rosslyn-Ballston corridor, which he deemed an “equity issue.”

“I’d hope with this more permissive approach, we can get these companies really thinking about how they deploy on Columbia Pike, Lee Highway, Shirlington, all these areas not served by the multiplicity of modes on the R-B corridor,” Dorsey said.

Gutshall even proposed someday moving to a “free for all” approach, where the county would require companies to “draw down” if they can’t provide data demonstrating they’re hitting a target number of trips per day. Dorsey even suggested setting a cap on the total number of vehicles in the county, then putting forth some sort of competitive bidding process for companies looking to meet that demand.

The new policy also bans people from riding the scooters on sidewalks and county trails — staff believes the county would need to pass a new ordinance to allow them on the trails, yet lacks the authority to do so under state law — and caps their speed limit at 10 miles per hour.

Kilberg suggested changing both provisions, particularly the speed limit, as the company’s scooters are currently capped at 15 miles per hour.

“Most people aren’t going 15… and if you’re only using them on the street, you’re competing with other cars,” Kilberg said.

But any of those proposed changes would only come once the county gets a chance to evaluate the results of the pilot, Cristol said. County staff plans to collect data from the companies on the scooters and bikes, and gather comments from the community to gauge how the dockless vehicles are working in practice.

“We want complaints, commendations, to know if you’re enjoying the program, or possibly not,” said Paul DeMaio, the pilot program’s manager.

END_OF_DOCUMENT_TOKEN_TO_BE_REPLACED

More Stories
Listing of the Day: 3305 N. Albemarle StreetProgressive Voice: Autonomous Vehicles — On the Street Where You Live?