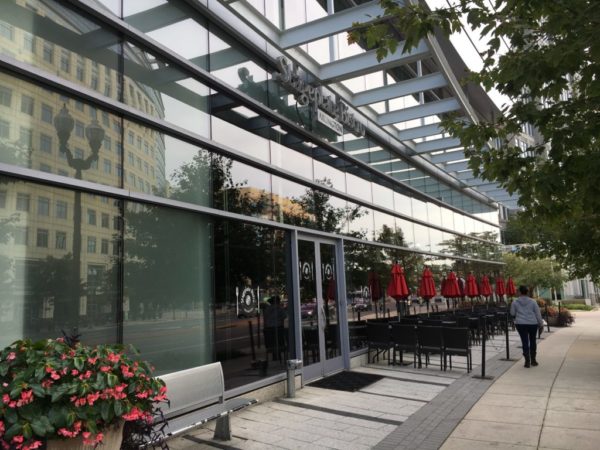 (Updated at 4:15 p.m.) Stageplate Bistro in Ballston still plans to reopen following a summer hiatus, though it likely won’t welcome diners once more until late next month.

The restaurant, located at 900 N. Glebe Road, shut its doors back in August, as its owners hoped to take a pause from some lengthy work weeks and revamp the eatery’s web presence. Originally, its proprietors had planned to reopen by Sept. 1, but that date came and went without any news from the restaurant.

General Manager Mary Marchetti told ARLnow that Stageplate is now “shooting for” Nov. 26, the day after Thanksgiving, for a grand reopening. She says she and the restaurant’s executive chef — her husband, Nelly Gonzalez — have spent the last few months working to “take a breath and take stock” of how Stageplate could expand its menu offerings going forward.

The pair opened the restaurant, which primarily serves American cuisine, late last summer on the first floor of the Virginia Tech Research Center. Since then, Marchetti compares the process to one long soft opening, as Stageplate has been primarily focused on lunch. When the restaurant reopens, she plans to focus on dinner, brunch, happy hour and even catering for local businesses.

That will include some additions, like pizza and the Turkish flatbread “pide” to the menu, though she stressed that “all the favorite everyone loved before” will remain on offer. That includes Stageplate’s sangria wine slushies, which she said was a big hit in the restaurant’s first year.

“We just can’t wait to throw open the doors again,” Marchetti said. “Our regulars and the whole community has been so unbelievable and so encouraging.”

Stageplate’s new website is now active as well and Marchetti plans to make full details about the reopening available on that page in the coming weeks.