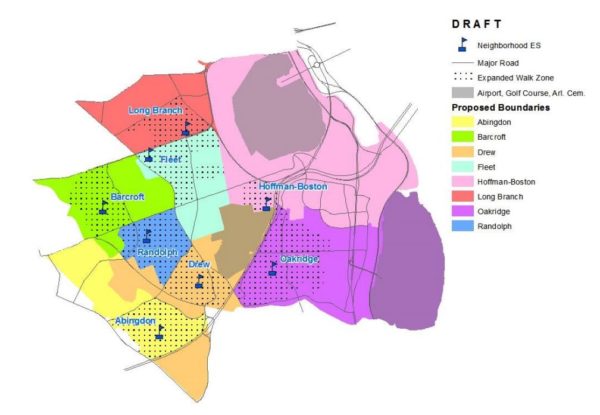 The following Letter to the Editor was submitted by Mike Rosenberger, a parent of a second grader at Abingdon Elementary who has deep concerns about a proposal by Arlington Public Schools officials that would send some students in South Fairlington neighborhoods to Drew Model School instead of Abingdon.

The School Board has spent the last few months considering a redrawing of boundaries for eight South Arlington elementary schools, precipitated by the opening of the new Alice West Fleet Elementary next year, and tempers have frequently flared over how the changes will impact Drew, in particular. But one APS proposal designed to alleviate those concerns has prompted new worries among Abingdon parents.

The Board is still considering a variety of proposed maps, and will approve final boundaries in December.

I am writing regarding the proposed elementary school boundary map released at APS’s “What We Heard” meeting on Oct. 17. APS’s proposal to bus the students of southern Fairlington from the walkable Abingdon school zone to Drew Model School is not in the best interests of the children and does not reflect the values or the limited transportation resources of the county. The failure of the “What We Heard Proposal” to address in a fair and appropriate way several of the county’s guiding principles in the redistricting process means that this map should be withdrawn from serious consideration.

One of APS’s objectives in establishing new elementary school boundaries is to ensure that most students can attend the school closest to their home. Under the current proposal the students of southern Fairlington, all of whom live within one mile of Abingdon, would be bussed up to two miles to Drew Model School. This proposal would effectively eliminate the popular options of walking and biking to school for all southern Fairlington students, despite the know health benefits of walking or biking to school. Virginia’s Safe Routes to School initiative recognizes that children who walk or bike to school are more active, more physically fit, and more ready to learn when they arrive at school than students who are driven or bussed to school.

Increasing the school transportation needs of Fairlington also has important consequences for APS’s future capital and operating costs. The fiscal year 2019 school budget already allocates $18.3 million for transportation and was only balanced by extending the useful life of buses by three years. Arlington County is already being forced to make difficult financial decisions about existing tax rates and services. The School Board must look for opportunities to stabilize or reduce transportation costs and concentrate its budget on children’s educational needs.

The walk from southern Fairlington to Abingdon is through a safe neighborhood that features contiguous sidewalks, crosses no major roads, has no traffic lights, and, for some children, would be as short as .3 miles. Expanding the Abingdon walk zone would be a common-sense decision that supports APS’s dedication to the welfare of the whole child and would seize a valuable opportunity to reduce transportation needs from the current levels.

I ask the School Board to consider the significant benefits of leaving the southern portion of Fairlington within the borders of Abingdon Elementary School. I understand that redrawing school boundaries is a difficult process. Finding a better alternative to the current proposal would not only be in line with Arlington County’s efforts to promote walkable communities, but would also serve the health interests of the children of southern Fairlington and APS’s limited transportation resources and budget.

I encourage APS to withdraw the “What We Heard Proposal,” to explore other options, and to think more creatively about possible solutions to the challenges we face as we work to ensure our schools meet the needs of our communities.

ARLnow.com occasionally publishes thoughtful letters to the editor about issues of local interest. To submit a letter to the editor for consideration, please email it to [email protected]. Letters may be edited for content and brevity. Photo via Arlington Public Schools.