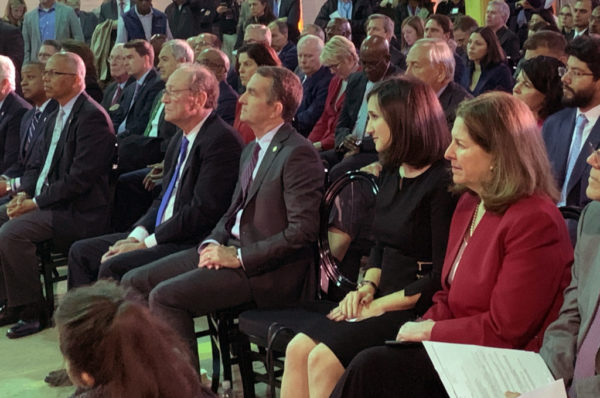 Amazon’s new headquarters will fundamentally transform Arlington in the years to come, but county officials are hoping to reassure residents that the area won’t change in the blink of an eye.

Instead, Arlington leaders are painting the arrival of the tech giant — and the 25,000 workers set to someday occupy its new office space — as a development that will shape the county’s economic landscape over time, rather than overnight. And, they hope, that will give the county time to prepare accordingly.

“This is not going to feel like a tsunami of new people on our streets or kids in our schools,” County Board Chair Katie Cristol said during a question-and-answer session live-streamed on Facebook last night (Tuesday).

Critics of the county’s courtship of Amazon have long feared the impact that thousands of highly paid workers arriving in the region could have on everything from home prices to school overcrowding. But Arlington leaders have often countered that the region is experiencing dramatic growth at the moment, and seems set to see even more in the future, meaning that Amazon’s arrival might not seem especially out of place.

Now that Jeff Bezos and company have made the big decision, targeting Crystal City, Pentagon City and Potomac Yard for half of its proposed second headquarters, officials remain confident in those predictions. Cristol, for instance, noted Tuesday that the tech company could draw as much as 15 to 20 percent of its new workforce from current county residents.

“They located here because they want access to the tech talent we have here,” Cristol said.

As for the rest of the new Amazon staffers, Arlington Economic Development Director Victor Hoskins pointed out that they won’t be arriving on the county’s doorstep next week, or even next month. Under the terms of the company’s proposed deal with the state, Amazon would only hire about 400 workers for the new Arlington campus next year.

That number will ramp up sharply over time, however, leaping to 1,180 new staffers in 2020 and then 1,964 workers the year after. But Hoskins noted that the pace of change would’ve been even more dramatic had Amazon stuck with its original plan to house all 50,000 workers in one city, rather than splitting “HQ2” between Arlington and New York City.

“After February, when the deal is set to be approved [by the Board], you’ll see the first employees arriving,” said County Manager Mark Schwartz. “Beyond that, I don’t think people will see a lot different in first year… It’ll become more noticeable a few years out.”

For parents nervous about how many kids those new workers will bring with them, Cristol is also optimistic that the school system will be able to handle the influx of students. She expects that the county will only see two to three additional students in each school per year, and that’s only when Amazon fully ramps up hiring in the coming years.

Depending on how the county is calculating that figure, such an increase would work out to anywhere from 70 to 105 new students enrolled in Arlington Public Schools each year, at a time when the school system is already struggling with severe financial pressures to match rising enrollment.

“That’s not nothing,” Cristol said. “But compared to the 500 students per year that APS is already adding, it’s really manageable.”

But Schwartz noted that, under the county’s revenue-sharing agreement with APS, roughly half of the tax revenue that Amazon generates will flow into the school system’s coffers. He estimates a $315 million increase in tax revenue over the life of the county’s deal with Amazon, which beats county projections by about $160 million between now and 2030.

Of course, Schwartz says the county will still feel some pain in the short term. Though Amazon represents a tax windfall for Arlington, he warned that it will take time for the county to feel the benefits — and that means that painful measures like layoffs, service reductions and tax increases remain on the table for the county’s new budget.

“We’ve been through several difficult budget years and we have a couple more to bridge to where we’re going to be,” Schwartz said.

Cristol acknowledged that there are some “difficult short-term conversations” on the way in the county, particularly as Arlington tries to prepare for Amazon’s impact without the tax revenues it needs to fund necessary projects and services.

But she also pledged to be open to having those difficult discussions. Some Amazon skeptics have already called on the Board to hold multiple town halls focused on Amazon alone, and Cristol said officials plan to do so, and more.

“Let us know if you want us to come meet with your civic group,” Cristol said. “We plan to have many conversations in the community about this.”