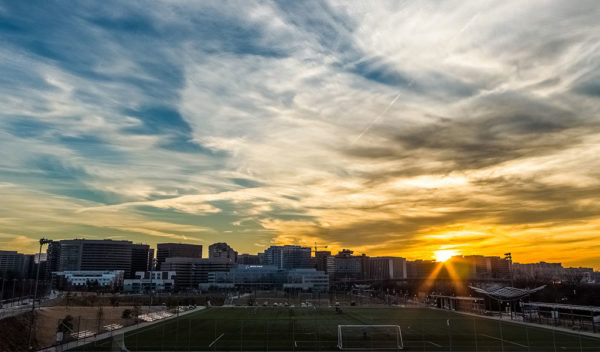 Arlington and Virginia economic development officials have landed the big prize — Amazon — and now are hoping that the e-commerce and cloud computing giant’s arrival will help them lure other West Coast tech firms.

Victor Hoskins, Arlington Economic Development Director, said Friday at the DCA Live Big Growth Summit in Crystal City that he and state officials have taken trips to Silicon Valley and other West Coast locales in an effort to convince companies to consider moving or opening offices in Arlington.

But Hoskins now plans to double down on those efforts with a revamped approach. The time is ripe, said Hoskins, with Arlington enjoying the Amazon afterglow and California cities grappling with sky-high housing costs and office rents, pitched competition for talent and other problems.

“We do go out there [to the West Coast] but not in the same focused way that we’re thinking about now, which is lining up and showing them: here is the talent, here is the transportation, here is the housing, here is the opportunity that you have,” he said.

Hoskins said that the D.C. area as a whole is “an undervalued asset” and needs to do a better job of branding itself as one of the top 5 tech cities in the country, which he argues it is. The region is rich in tech talent and provides easy access to East Coast markets and Europe, in addition to the federal government, he said.

Others who spoke at Friday morning’s event echoed Hoskin’s call to put the D.C. area in the same conversation as top tech destinations like the Bay Area, New York and Seattle.

“I think we’re a serious technology city,” said entrepreneur and venture capitalist Michael Avon. “It’s an amazing branding moment for an area that’s done a very bad job of branding itself” due to competition among regional jurisdictions.

D.C., Maryland and Virginia, Avon and others argued, have done a good job of fixing their biggest individual weaknesses. D.C. and Maryland are now considered more pro-growth and pro-business than just a few years ago, Avon said. Former Virginia Gov. Terry McAuliffe, meanwhile, touted the work he and current Gov. Ralph Northam have done to promote Virginia as a diverse, welcoming place and reverse the state’s previous anti-LGBT and “transvaginal ultrasound” reputation. That coupled with Virginia’s stable pro-business environment, he said, have allowed the Commonwealth to steal deals away from places like North Carolina.

But can Arlington and the region effectively compete with long-established tech ecosystems like the Bay Area? Yes and no, says high-profile angel investor Jason Calacanis.

Calacanis, long a proponent of startups locating in Silicon Valley, said via email that investors like himself no longer expect companies to base their entire workforce in the Bay Area. Large satellite offices, he suggested, may become the norm.

“It’s a great idea for founders to have their HQ in the Bay Area and 50%+ of their workers in a city with half the operating costs,” he told ARLnow. “Five or ten years ago I would have told founders to bite the bullet and make it work here, but costs are just bonkers and people don’t want to live in crime-filled, dirty San Francisco any more.”

“My firm, launch.co, which has 15 team members, has four [employees] based in Toronto for this very reason,” Calacanis added. “We couldn’t find growth, marketing and designers in the Bay Area.”

To Jonathan Aberman, a D.C. area tech consultant and venture investor, talent is the key to the area’s ascendancy. But it’s not the only factor.

“This is a very, very good market for talent and that is the biggest reason why companies locate other places, they locate because they need talent,” said Aberman. “If you add on top of that that there are more Fortune 500 companies — who buy technology — located this region than many people appreciate, and you add on top of that proximity to the federal government, which is a big buyer of technology, all those things come together to make this a really really good market to open an office.”

The biggest weakness in the local talent market, according to both Aberman and Avon, is a lack of experienced product builders — people who have the know-how to guide the development of a technology product. But that may be about to change.

“One of the big things Amazon will bring is product people,” said Avon.