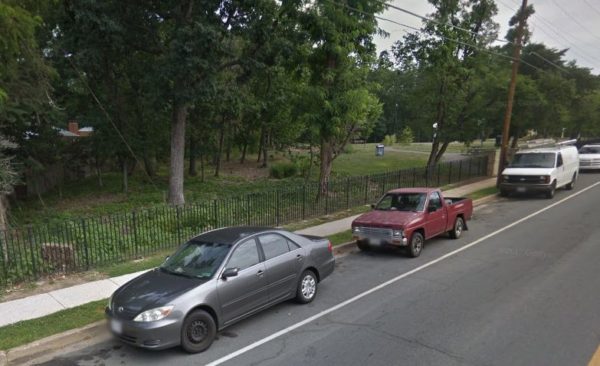 (Updated at 8:15 p.m.) Arlington officials are gearing up to erase parking restrictions on several streets in the Forest Glen neighborhood, angering some residents there but meeting the demands of others in nearby Arlington Mill.

The County Board is set to consider a resolution later this month ending zoned parking restrictions along the following the roads, per county spokeswoman Katie O’Brien:

All of those streets are currently covered under “Zone 24” of the county’s residential permit parking program, barring unauthorized cars from parking there between 9 p.m. and 6 a.m. each day.

The Board has generally avoided any changes to the program recently, after declaring a moratorium on applications for new parking restrictions while members weigh potential reforms to the county’s entire zoned parking system. Board members and some community leaders have started to doubt that the current program, originally designed to keep commuters out of D.C.-adjacent neighborhoods, is working as intended.

But the Board could soon make these changes in Forest Glen all the same, given the loud complaints from people in Arlington Mill.

According to a letter sent to Forest Glen residents from the Board, and provided to ARLnow, people in the neighborhood have “experienced great difficult with curbside parking” since the parking restrictions went into effect a few years ago. County staff have worked for months to find an “interim solution” to the dispute, without success, pushing the Board to take this step.

It doesn’t help matters either that staff believe the parking restrictions “depart from the program’s original intent and place an undue burden” on surrounding streets, the letter reads. The Board has since concluded that “the determination for the restrictions deviated from standard staff practices, including data collection and verification,” spurring the need for the change.

“The County Board is unwilling to allow restrictions to the public right of way continue considering the fundamental discrepancies in establishing the eligibility of the above streets for the RPP program,” Board members wrote.

But one Forest Glen resident, who requested anonymity for this article, claimed that neighbors had “myriad reasons” for requesting the parking restrictions in the area. Those ranged from concerns over “out of county parkers, unregistered and abandoned vehicles” to “crime” and “blocked driveways,” all of which, this person believes, meet the standards of the county’s parking rules.

The Forest Glen resident further argues that the Board would be taking an “unprecedented and historic” step by removing the parking restriction, which will “put all other RPP areas in Arlington at risk of being removed.”

“The removal of Forest Glen’s zone parking represents an unprecedented intervention by the County Board into administrative decisions of county government,” they wrote in an email. “Additionally, every RPP area now faces the increased likelihood of removal.”

O’Brien stressed in an email, however, that the Board’s proposed resolution “only applies to these streets in zone 24 and will not impact any other neighborhoods or zones.”

The Board is set to consider the matter at its Jan. 26 meeting, and plans to hold a community meeting on the subject tonight (Tuesday) at 7 p.m. in the Arlington Mill Community Center (909 S. Dinwiddie Street).

Meanwhile, the county is hoping to wrap up its review of the parking program sometime by the end of the year, or in early 2020, according to county spokeswoman Jessica Baxter.