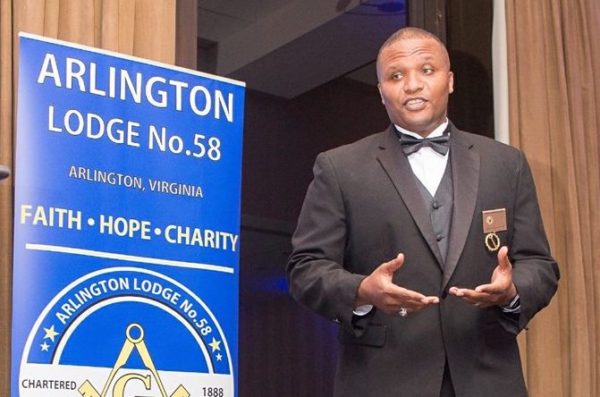 The head of Arlington’s chapter of the NAACP is launching a primary challenge to Del. Alfonso Lopez (D-49th District), a powerful member of Democratic leadership in Richmond who has attracted criticism from within his own party in recent months.

Julius “J.D.” Spain told ARLnow that he’s filed to run as a Democrat in the South Arlington district, in the hopes of providing people there “with an alternative to the status quo.”

Lopez, who also serves as Democratic co-whip in the House of Delegates, first won the seat back in 2011, replacing now-Sen. Adam Ebbin (D-30th District). Lopez hasn’t faced a primary challenge since he won a contest with Stephanie Clifford for the chance to run for the seat in the first place.

“No incumbent is entitled to stay in office forever,” Spain said. “And I believe I can sharply draw a contrast with some of what Alfonso has done, or hasn’t done, over the years and bring a fresh new face to the field, to the party.”

Spain is a 26-year Marine Corps veteran who has been active in Arlington’s civic institutions for years now. He’s served on the county’s Civil Service Commission since 2014, and worked in leadership roles in Nauck’s Masonic Lodge 58.

Spain adds that he’s been active with the NAACP for roughly two decades, and was elected as the group’s president just last fall. He’s also served as a precinct captain for the county’s Democratic committee, and describes himself as “a hard-core Democrat,” though this is his first bid for elected office.

He declined to offer specific critiques of Lopez’s record, only saying that he would lay out “temperate, discrete and pointed” rebuttals over the course of the campaign.

Other Democrats have not been nearly so reticent to criticize Lopez, however — Lopez has reported working in the past for a private company that runs an Immigration and Customs Enforcement detention center in Central Virginia, sparking all manner of protests over the past year. Lopez has since worked to defuse concerns over those ties by meeting with activists to explain his support for immigrant rights, particularly given his status as one of just a handful of Latino legislators in the General Assembly.

For his part, Lopez says he plans to run for a fifth term on the strength of his “record of fighting hard for our progressive values in Richmond,” citing his work on housing affordability, environmental issues, the Medicaid expansion and Metro funding.

“As the son of an undocumented immigrant, I grew up seeing discrimination firsthand and made it my mission in life to seek justice for all,” Lopez wrote in an email. “I will continue fighting every day to build a Virginia where we lift everyone up and leave no one behind. I look forward to a substantive conversation about how we can best serve the people of the 49th District in Richmond and in our community.”

Meanwhile, Spain says the primary focus of his run against Lopez will be on issues like housing affordability in South Arlington, a key concern for the community as Amazon moves in nearby, and the achievement gap between white students and students of color in Arlington schools.

He also hopes to “represent the people, and not just the people who have money,” and says he won’t accept any donations from corporations over the course of his campaign.

“I’m not taking any contributions from any corporations, or any businesses that infringe on the rights of those less fortunate or those that harm the environment,” Spain said. “I’m not a deep-pocketed politician with a lot of ties. I’m just your average American citizen, and that’s who I want to represent.”

The issue of corporate money in Virginia politics has become a particularly potent one among Democratic candidates for office in recent months, with many swearing off money from state-regulated utilities like Dominion Energy, in particular. Lopez himself has pledged to refuse money from Dominion, though he has taken cash from corporations — Gov. Ralph Northam is backing a ban on corporate campaign donations in this year’s legislative session, though Republicans have shown little interest in advancing such a bill.

Accordingly, Spain is hoping to run a “grassroots” campaign, though he says he’s still getting organized a bit. He hopes to make a formal announcement at a county Democratic committee meeting next month, then ramp up the campaign from there.

A June 11 primary will decide all races between local Democrats. All 140 state legislators are set to face voters this November.