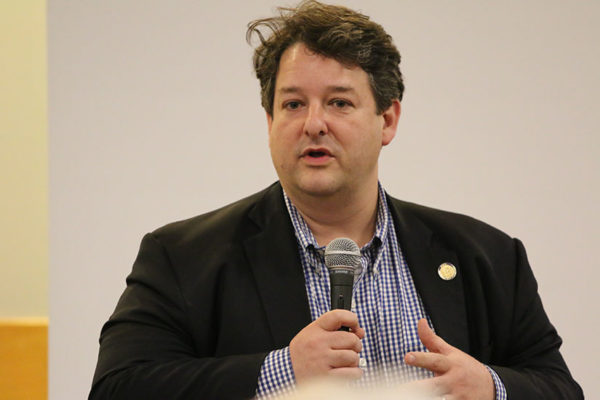 As Amazon moves into Arlington, it seems the company is ready to start spreading some of the wealth around to local lawmakers — but, so far, one has already turned down the tech giant’s cash.

Del. Alfonso Lopez (D-49th District) told ARLnow that Amazon sent him $1,000 in late October to back his re-election effort this year, just before announcing that it plans to set up a new headquarters in Pentagon City and Crystal City. In fact, Lopez’s South Arlington district covers some of the locations that the tech firm eventually plans to call home.

Yet Lopez says he quickly returned the contribution once Amazon formally selected Arlington, in order to avoid any implication that the company will influence his decision making in Richmond, no matter how small.

“While I would never allow a campaign contribution to affect my judgement as an elected official, trust in the government is essential,” Lopez wrote in a newsletter to constituents today (Monday) announcing his decision. “Constituents should have no doubts about the independence of my judgement, or think there are any motivations beyond doing what is right for the community. This is the right thing to do. Fostering trust in government is more important now than ever.”

Lawmakers are currently gearing up to vote on an incentive package that could someday send anywhere between $550 million and $750 million in state grant money to Amazon, so long as the company comes through on its promise to bring at least 25,000 jobs to the area. Legislators will also be charged with signing off on hundreds of millions more in transportation and education spending designed to lure the company to Arlington, likely to be included as part of a bill adjusting the state’s biennial budget.

Though the company has attracted plenty of criticism locally, the General Assembly is broadly expected to approve the incentives (negotiated primarily by Gov. Ralph Northam’s staff) by a wide margin. Yet Lopez’s move comes as Democratic politicians all over Virginia wrestle with the influence of corporations on the state’s politics.

A growing number of Democrats, Lopez included, have pledged to refuse money from state-regulated monopolies like Dominion Energy, long the biggest political donor in the state. Northam has also backed a ban on corporate donations of any kind in state elections, and Lopez has recently drawn a primary challenger pledging not to accept any cash from corporations.

In a separate bit of controversy, activists have targeted Lopez for scorn after he reported earning thousands of dollars from a company that runs an ICE detention center in Central Virginia.

In general, however, Amazon has yet to chip in much money for Virginia lawmakers, even though the company has long operated a variety of offices and data centers around the state.

But the tech firm did send Lopez $250 back in October 2017, and donated $5,000 to Northam’s inaugural committee last January. Amazon has also contributed $11,000 to the influential Northern Virginia Technology Council, and currently retains the services of nine lobbyists registered in Richmond, according to state records.

As for how much money the tech company has since donated to other state lawmakers, that won’t become clear until legislators submit final campaign finance reports covering the second half of 2018 tomorrow (Tuesday). All 140 lawmakers will be on the ballot this fall, and will soon begin reporting campaign contributions on a more regular basis.