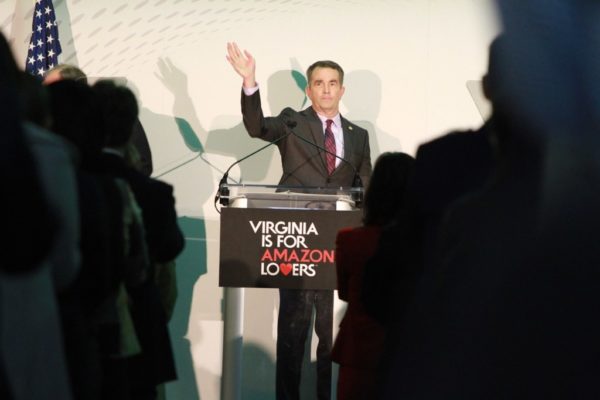 State lawmakers are now setting the wheels in motion to approve at least $550 million in grant money to Amazon, a process that should help seal the deal to bring the tech giant to Arlington.

Legislators in both chambers of the General Assembly have now introduced bills to make good on the deal that Gov. Ralph Northam’s administration helped strike with Jeff Bezos’ firm, promising hundreds of millions in incentive cash if Amazon comes through on its promise to bring 25,000 jobs to Pentagon City and Crystal City between now and 2030.

Arlington is set to chip in some cash of its own to make the deal work (about $23 million in grant money over 15 years, drawn from a projected increase in revenue from the county’s tax on hotel stays) and new investments in transportation and education programs beef up the state’s offer to Amazon by hundreds of millions more.

But the new legislation lays out the clearest look yet at what Northam’s team promised the tech company — and makes it clear that Amazon could earn another $200 million if it adds another 12,850 jobs at the new headquarters over the years, bringing its haul to $750 million in total.

Each would establish a “Major Headquarters Workforce Grant Fund” to lay out the payments, attaching a $22,000 price tag to each new job Amazon brings to the area over the next 15 years. To qualify for the grant, the jobs will need to come with an average wage of $150,000 per year starting in 2019, increasing by 1.5 percent each year after that.

Then, if the company can deliver on the additional 12,850 jobs beyond the original 25,000 it promised, it will collect another $50 million each year through 2034.

The bill also requires Amazon to provide evidence to state officials each year that it’s meeting the requirements to earn the grant payments.

The legislation generally seems like a sure bet to pass, considering that several influential state lawmakers have already had a chance to help shape the incentive package.

A panel known as the Major Employment and Investment Project Approval Commission signed off on the bulk of the details in tandem with Northam’s staff, and that group included some of the most senior members of both parties in the House and the Senate. As Sen. Adam Ebbin (D-30th District) told ARLnow, the incentive package “may not face much opposition, but it’s still meaningful.”

Nevertheless, some of Amazon’s fiercest opponents in Arlington are urging state lawmakers to reject the deal. A group of advocates dubbing themselves the “For Us Not Amazon” coalition, including organizers from Our Revolution Arlington, the Metro D.C. chapter of the Democratic Socialists of America and the Latino rights group La ColectiVA, is calling for legislators to vote down the incentive package in its entirety, and organized a demonstration at the county’s Amazon-focused listening session Saturday (Jan. 12) to underscore that point.

“There should be no incentives for Amazon, and city and state grants and funding should go to protect communities at risk,” the group wrote in a statement. “Public officials need to hear our communities’ concerns about Amazon’s current and future impact on residents.”

But a vote on the incentive bills will be only one piece of the puzzle in finalizing the Amazon agreement, lawmakers say. The state promised transportation improvements all around the company’s proposed campus, and a huge influx of cash into tech-focused higher education programs, and that money will likely be included in adjustments to the biennial state budget.

That means cash for everything from Metro improvements in Crystal City to money for an expansion of George Mason University’s Virginia Square campus will all be wrapped up in one massive budget bill.

Of course, Del. Patrick Hope (D-47th District) points out that any lawmakers hoping for a seperate vote on the Amazon-specific portions of the budget could move to “sever” those sections from the rest of the spending plan. Hope says he generally supports the deal, but he fully expects there to be some discussions over the course of the remainder of the General Assembly’s 46-day session about the issue.

“I believe it has the votes to pass, but there could be some debate on that on the floor,” Hope said. “I suspect we will see that, in fact.”

Arlington officials are set to sign off on their portion of the Amazon deal no sooner than the County Board’s Feb. 23 meeting.

The legislature is set to adjourn that same day, meaning that any Amazon bill will likely have cleared the General Assembly well in advance of that gathering — however, budget debates have been known to linger well past the proposed end of each year’s legislative session.