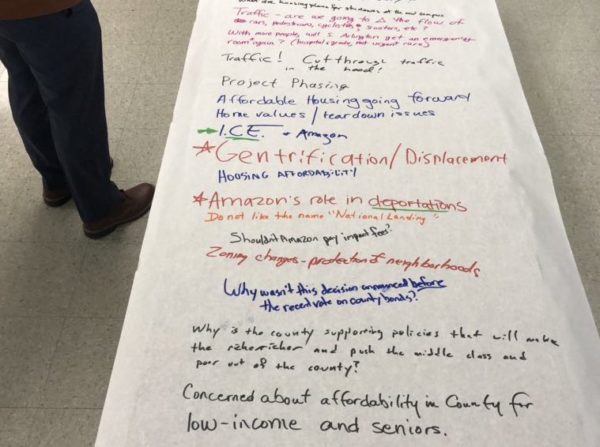 The event is set to run from 9:30-11 a.m., held at the National Rural Electric Cooperative Association building at 4301 Wilson Blvd and designed as a chance to let county residents air their concerns about the tech giant as it prepares to move into space in Crystal City and Pentagon City in the coming months.

County spokeswoman Jennifer Smith says officials are closely “watching the forecasts,” but they currently expect they’ll be able to squeeze the event in before the weekend’s snow storm hits.

The County Board and other local officials last convened a similar gathering on Dec. 17 at Gunston Middle School, as part of a broader push to accept community feedback on Amazon in person. The first meeting largely centered on debates over the company’s impact on housing, transportation and the labor force in the coming years, all concerns raised by supporters and opponents of the tech firm alike.

Since then, the county has attracted some criticism for its handling of the town halls, particularly when it comes to making meeting materials available in Spanish and offering translators at each event.

18 Days since @viva_lalucha of @LaColectiVA703 spoke to the county board and almost 2 months since the original #HQ2 announcement, and still nothing on the @ArlingtonVA spanish language website. pic.twitter.com/gscnufWnkr

Even the info for the next listening session (also only posted online and only on the English website) makes only a small comment that translation would be provided upon request. But you’d need to have internet and be able to read English to make that request. ¯_(ツ)_/¯ pic.twitter.com/l2PdkVxqc4

However, the county’s meeting advisory does say that language interpretation services will be available upon request.

Saturday’s listening session could well be the last chance for the Board to hear directly from the public on Amazon before it holds a vote to approve an incentive package (hammered out largely by state officials) that helped convince the company to choose Arlington for the new offices.

Board members have long planned to vote in February on the topic, no sooner than the group’s meeting on Feb. 23, though the debate is largely expected to be a mere formality. State lawmakers will also sign off on other elements of the incentive package over the next few weeks, during the current General Assembly session.

END_OF_DOCUMENT_TOKEN_TO_BE_REPLACED

More Stories
Driver Flips Car in Yorktown Neighborhood, Lands in Front of HomeNew Soup-Focused Restaurant On the Way in Ballston