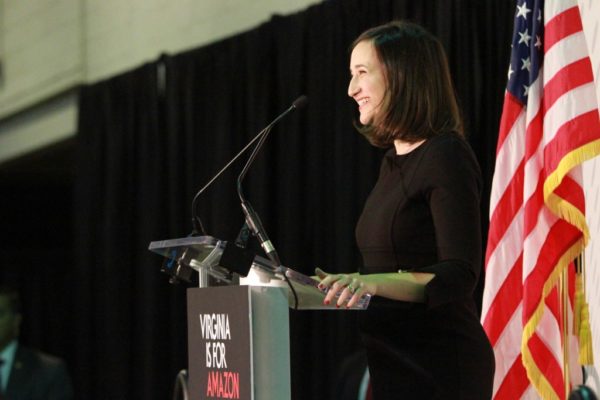 Arlington leaders are now planning on hosting at least two Amazon-focused town halls to let residents share their concerns about the tech giant ahead of a planned February vote on the deal to bring the company’s new headquarters to the county.

County Board Chair Katie Cristol announced at the Board’s meeting yesterday (Tuesday) that the county will hold a pair of “community listening sessions” to give people the chance to talk directly with Arlington staffers and Board members alike about Amazon. She says the county is targeting Dec. 17 at 7 p.m. and Jan. 12 at 9:30 a.m. for those sessions, but has yet to settle on locations for either one.

“There have been a lot of questions about opportunities to engage or ask questions directly to County Board members as well as to learn about this opportunity and its impacts on our Arlington community,” Cristol said. “We’ve heard that people are very interested in an in-person opportunity to share their feedback and county staff.”

Cristol added that any Board vote on the proposed deal, largely sketched out by state officials, would come no sooner than Feb. 23. In the likely scenario that the deal wins the Board’s approval, the company would then face a whole variety of Board hearings as it looks to build new facilities in Pentagon City and Crystal City.

The county has also scheduled an array of online Amazon question-and-answer sessions on Facebook.

Arlington’s already held a pair of those, and will hold three more next month: a Dec. 6 session focused on transportation, a Dec. 19 discussion on schools and education and a Jan. 16 session on housing.

Skeptics of the tech giant’s impact on the area have accused the Board in the past of allowing too little community discussion on the issue, with many skeptics flooding a Board meeting earlier this month to raise the matter. Progressive groups like Our Revolution Arlington have also specifically called for a series of such listening sessions by Board members.