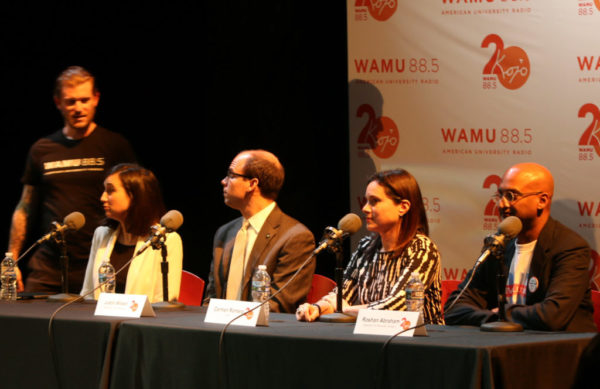 How might lowly local officials be able to bring one of the world’s largest companies to heel?

That’s the prime question on the minds of many Arlington and Alexandria residents worried about how Amazon might soon reshape their communities.

And while county and city leaders are optimistic that the tech giant will prove to be a reliable partner in the region, they’re also admitting that they don’t have all that many tools to push Jeff Bezos and company around.

“We have to focus on using the policy tools that we do have,” said County Board Chair Katie Cristol at an Amazon-focused town hall in Crystal City’s Synetic Theater last night (Monday).

Public speakers at the event, which was hosted by WAMU 88.5’s Kojo Nnamdi Show, fretted over how localities might address everything from the company’s labor practices to its commitment to hiring a diverse workforce.

Leaders in attendance sought to reassure nervous neighbors that localities will be able to extract community benefits from the company as it builds new space in Pentagon City and Crystal City. County Board member Libby Garvey even expressed optimism that “Amazon is going to affect us, but we’re going to affect Amazon too” when it comes to changing the company’s culture.

But concerns abound that Amazon’s status as the new economic engine for the area will give it unprecedented bargaining power in any dispute with local leaders.

“The County Board works really hard and wants to do the best they can for us, but Amazon, at any point, can say ‘No,'” said Roshan Abraham, an organizer with Our Revolution Arlington, a progressive group that has opposed the county’s pursuit of Amazon. “They always threaten to pack up and leave, it’s what they always do…  We have very little leverage, particularly at the political level.”

Part of the problem for local leaders is that state law limits their ability to pursue some of the most aggressive pro-worker measures favored by Amazon skeptics. Virginia’s legislature, long dominated by Republicans, has adopted a series of measures designed to make the state more business friendly — perhaps most notably, Virginia is a “right to work” state, limiting the ability of unions to charge workers fees for representing them.

Several members of local unions urged officials to press Amazon to sign “project labor agreements” ahead of any new headquarters construction, or a contract with a union to lay out the working conditions for a project before construction gets started.

But Virginia has laws on the books designed to limit government agencies from requiring such agreements, and Cristol pointed out that “the state has made it very clear that we can’t use those” in many situations.

However, she did pledge to urge Amazon to work with unions and offer fair working conditions on its construction sites — and the question gave her a chance to underscore just how meaningful it might be if her fellow Democrats seized control of the General Assembly in next year’s elections.

Other attendees were similarly nervous that the county won’t be able to force Amazon to fork over cash to spur the development of more affordable housing, particularly as the arrival of the company’s planned 25,000 workers strain the region’s housing market.

On that front, however, Arlington officials are confident that they’ll be able to use their existing development process to require Amazon to chip in more money for its Affordable Housing Investment Fund, a loan program designed to incentivize reasonably priced development. Of course, that will have to wait until the company starts building new facilities, which could take years yet.

In the meantime, housing advocates are optimistic that the tech giant is committed to the issue of housing affordability, and could agree to some select contributions on its own.

Carmen Romero, vice president of real estate development with the Arlington Partnership for Affordable Housing, said both Amazon and its major landlord in Arlington (JBG Smith) have told her they “want to be at the table” when it comes to discussions about creating new affordable developments. She even suggested that JBG could agree to donate some small portion of the large swaths of land it owns in Crystal City and Pentagon City to a nonprofit like her group, allowing for new affordable homes in the immediate vicinity of the headquarters.

“It’s very fair to ask Amazon to join us at the table as part of the philanthropic community,” Cristol said. “If they’re going to be a major player here, we’re very interested in seeing a big commitment from them.”

Alexandria Mayor-elect Justin Wilson added that the mere fact of Amazon’s interest in the region has already changed the conversation at the state level. He noted that state lawmakers were previously reticent to commit to major affordable housing funding, despite Northern Virginia leaders “banging our heads against the wall in Richmond,” but officials agreed to send an additional $15 million to the Virginia Housing Development Authority as part of the offer to Amazon.

“This was important to Amazon,” Wilson said, drawing a few laughs from skeptics in the audience. “But we were able to make the argument to the state government that this was something that had to be part of the package to help us attract a major employer.”

For Amazon opponents, however, it’s not enough that the company and state might voluntarily agree to measures to offset the impending impacts on the county.

Abraham’s group is pushing the concept of a “community benefits agreement,” a deal that a coalition of neighbors would strike directly with the company to ensure it invests in the community’s priorities, as an alternative to government officials haggling on their behalf.

It may not be enough to answer all their concerns, but he expects it may be a better path to pursue than hoping local politicians can win battles with a company owned by the world’s richest man.

“If we get Amazon to make these commitments to our community now, that, I believe, is the best way we have of protecting ourselves,” Abraham said.