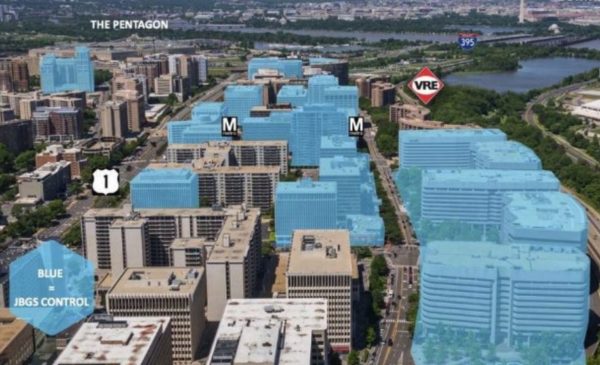 As all signs continue to suggest that Crystal City will soon become home to at least half of Amazon’s new headquarters, affordable housing advocates are increasingly concerned that Arlington won’t force the tech giant to take action to mitigate the new office’s impact on housing prices in the county.

The company’s abrupt decision to split its “HQ2” between Crystal City and New York City, as detailed in a flurry of national news reports, means that Arlington could see only half of the 50,000 new jobs Amazon promised along with the new headquarters. Nevertheless, fears linger that the arrival of even a portion of those workers would further squeeze the county’s already tight housing market.

County and state officials have steadfastly refused to release any details about their pitch to Amazon, including details on potential economic incentives for the company, or any community benefits designed to account for how a sudden influx of thousands of workers might drive up housing prices and demand.

Amazon has also been mum on how it might set up shop in Crystal City, but speculation abounds that the company would move into the thousands of square feet of vacant office space controlled by JBG Smith, the area’s largest property owner. The real estate firm was intimately involved in assembling Crystal City’s HQ2 bid, and Arlington officials have salivated over the prospect that the company could reverse the county’s high office vacancy rate in one fell swoop.

But should Jeff Bezos and company move right in to that vacant space, experts worry that the county won’t have the ability to extract any cash for Arlington’s main tool for spurring the development of reasonably priced homes: the Affordable Housing Investment Fund, commonly known as the AHIF.

The program offers low-interest loans for new construction or redevelopment efforts to add more affordable housing in the county, and the county regularly requires developers behind high-density projects to contribute to the fund, in order to offset the impacts of that development on the rest of the county.

Yet Michelle Winters, the executive director of the Alliance for Housing Solutions, points out that Amazon could well avoid any such contribution, despite bringing thousands of highly paid workers to the area. After all, the company may simply prove to be a very, very large office tenant, and not plan any new construction in the county for years yet.

“These fees are a major component of how we pay for affordable housing in Arlington,” Winters told ARLnow. “But we just don’t know what kind of deal they’re potentially making with Amazon.”

Through a spokeswoman, Arlington Housing Director David Cristeal confirmed that the “county does not require AHIF contributions if a tenant moves into existing space without building anything new.”

“A developer or building lessee would not need to contribute to AHIF if they move into an existing building without requesting additional density and/or a site plan amendment,” Cristeal wrote. Site plan amendments, in general, are reserved for major construction projects.

County Board Chair Katie Cristol agrees with Cristeal’s assessment, noting that the “mechanisms for achieving contributions to the AHIF are tools available to us during the land-use process” only.

“The time at which we’d achieve something like that is as the building is built, not as a tenant moves in, which makes sense,” Cristol said.

What that means for the county’s potential deal with Amazon, Cristol can’t say. She says the county still has yet to work out the details of just how the tech giant would move in to Arlington, making it a bit too early to speculate on technical questions like potential AHIF contributions.

However, she did point out that the whole point of Arlington luring Amazon in the first place is to generate new tax revenue, which the county could then direct into the AHIF or other measures to preserve and create affordable housing.

“The reason to bring in new tenants to Arlington generally is they fund all those things,” Cristol said. “Whether it’s the AHIF, housing grants, public schools, transportation costs… It can be easy to lose sight of that.”

Of course, there are plenty of experts skeptical of just how much Amazon’s arrival will actually juice county revenues, especially if Arlington signs off on hefty tax breaks to lure the company here in the first place. For instance, the government accountability group Good Jobs First, an intense Amazon critic, estimates that localities can end up paying hundreds of thousands of dollars in subsidies for each job that a major new investor generates.

Kasia Tarczynska, a research analyst with Good Jobs First, notes that the county could always limit the tax breaks it offers the company and “use that money for affordable housing, public transit and workforce development.”

“In Boston, for example, as part of the incentive package, the city said it would invest $75 million in affordable housing, instead [of] giving that money to Amazon,” Tarczynska wrote in an email.

But that’s where the county’s secrecy around its offer to the company, which has been criticized by liberal and conservative activists alike, stymies further analysis.

Even still, Winters and Tarczynska both expect that the county could still work out a deal with Amazon that involves a contribution to the AHIF, or other affordable housing measures, even if it wouldn’t be strictly required by county ordinances.

“If I were Amazon, I would pay in more than what would ordinarily be required, because their own workers would benefit from more affordable housing in the community,” Winters said. “This is one of the biggest companies in the world… I’d imagine it could be considered the cost of doing business for them.”

Ben Beach, the legal director for the Partnership for Working Families, notes that plenty of other local officials have negotiated for such concessions as large companies have sought to move in to their communities. The question on his mind is whether Arlington officials will do the same.

“Local governments have a wide range of tools at their disposal; the question is simply political will,” Beach wrote in an email. “And in this case, we know there is substantial public money involved, so there’s really no excuse for anything less than a gold standard community benefits package.”