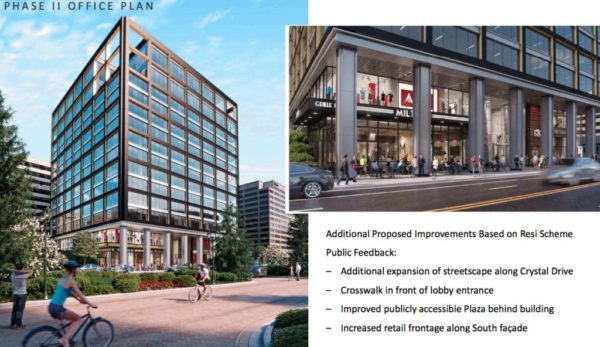 At an Arlington County Site Plan Review Committee meeting on Monday, the company presented an updated plan to renovate the 12-floor, 242,000 square foot building at 1750 Crystal Drive and modernize the building facade. The change comes less than a year after JBG Smith filed a plan to convert the office building into a 21-story residential tower, which in turn was a change in course from an approved circa-2015 plan to modernize the building and keep it as office space.

The new-new plan changes the building’s address to 1770 Crystal Drive and better integrates it into planned pedestrian improvements and the “Central District” retail cluster, which is to include an Alamo Drafthouse Cinema, restaurants with outdoor seating and a possible small-format grocery store.

The flip back to office will undoubtedly pique the interest of those trying to read the Amazon HQ2 tea leaves.

Betting markets and industry observers think the D.C. area is the most likely destination for the company’s second headquarters, and sources tell ARLnow.com that Crystal City is by far the most likely D.C. area location for it. Meanwhile, office vacancy in Crystal City remains high — it was just below 20 percent as of a year ago, according to county data — and the neighborhood’s largest and most influential landowner has scrapped an ambitious residential conversion plan in favor of sprucing up currently-vacant office space.

Amazon CEO Jeff Bezos said last week that an HQ2 decision will be announced by the end of the year. The company’s request for proposals specifies that HQ2 will require a large amount of office space — 500,000+ square feet — in a relatively short period of time after the announcement.

A spokesman for JBG Smith was not immediately available to comment, according to a PR rep for the company.