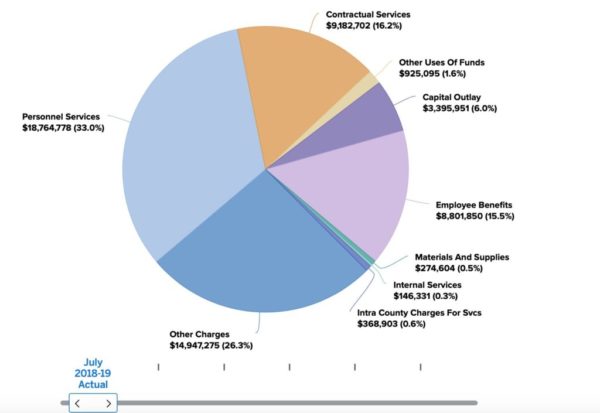 With a budget well over $1 billion, Arlington’s checkbook can feel a bit overwhelming to the average taxpayer — but the county is launching a new resource to help change that.

The county rolled out the first phase of “Arlington Wallet” yesterday (Tuesday), unveiling a new online tool to help Arlingtonians get a clearer look at how officials are spending money each year.

The website, commonly known as an “open budget” database, will allow users to access budget data in graphs and charts, and drill down into each county department’s budget for a clearer look at Arlington’s expenses and revenues over the years.

The tool also lets users create their own charts and download any of the raw data for themselves.

“There’s no greater obligation we have than to be good stewards of taxpayer dollars,” County Manager Mark Schwartz said in a statement. “Arlington Wallet makes it easier than ever for our residents and business owners to see exactly how the county is spending money.”

The database currently contains budget information from fiscal year 2014 through December 2018, though the county has plans to expand it in the future. Officials are also planning to launch a second phase of the tool later this year, with data on individual county transactions.

The county compared the new phase in a news release to a “a personal checkbook or online account statement” that will show “what the county is buying and who it’s buying it from.”

“Arlington Wallet” runs on a platform created by the software company OpenGov, which provides similar services to hundreds of other governments and government agencies. Information on how to access the database is available on the county’s website.

Arlington previously launched an open data portal with a variety of county information available back in 2016, and has since regularly convened meetings of an “Open Data Advisory Group” to guide its transparency efforts.