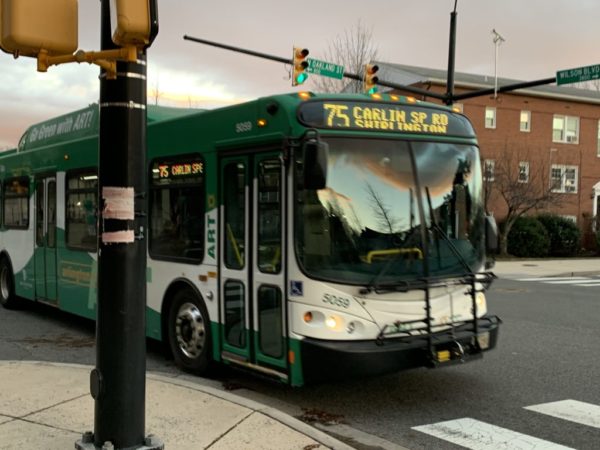 As Arlington’s bus service grapples with a shortage of drivers, the company responsible for doing the hiring says it’s bumping up starting salaries to lure more applicants.

Arlington Transit told riders last week that a lack of bus drivers has been a prime factor in a series of service delays over the last few months, putting most of the blame on the National Express Transit Corporation, the company that employs the drivers.

The bus service lamented that it’s “lost a number of bus operators to other companies in the region, and the resulting operator shortages are contributing to many missed ART trips each day.” With a tight labor market, it’s a problem that many bus services around the country have been experiencing recently, analysts say.

But National Express is taking new steps to remedy the problem, according to company spokesman Ed Flavin. He told ARLnow that the contractor recently “implemented a considerable increase to our starting wage in cooperation with our local labor union,” which went into effect on Jan. 1, in order to reverse this trend.

“We also provide sign-on bonuses, as well as other employee incentives to help improve recruitment and retention,” Flavin wrote in an email. “Our efforts have provided promising results, with a [recent] increase in qualified applicants.”

Flavin did not answer follow-up questions about the size of the salary bump, or what sort of resulting increase in hiring the company has seen.

“We recognize the importance of providing safe, reliable public transit for the ART community and we will continue to work hard to improve the reliability of ART service,” Flaven said. “Our number one priority will always be the safety of our customers.”

In the meantime, ART has still recorded some serious service issues. The “ART Alert” Twitter account, which announces all bus delays and cancellations, shows that the service has experienced 47 missed trips or other delays since Monday alone, though some of those problems are attributable to Tuesday’s snow and mechanical issues.

The bus service has indeed struggled with maintenance issues in recent months as well, in addition to problems with its real-time tracking service and phone service for disabled and elderly riders.