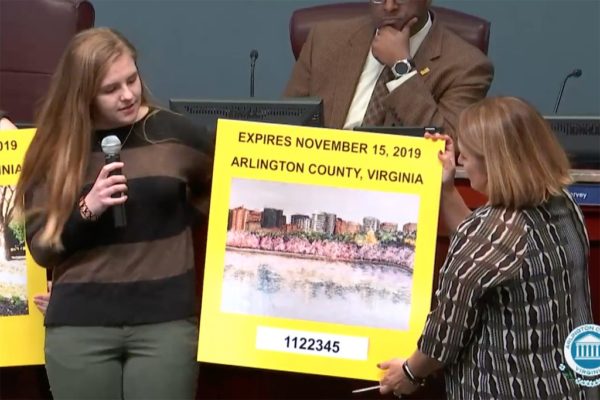 Arlington leaders have already decided to do with away with the county’s car decal program to track personal property tax payments, but they’re still looking to make the change a bit more official before it goes into effect this summer.

Starting July 1, county drivers will no longer need to display the brightly colored stickers on their cars to prove they’re paid up on their taxes. The County Board eliminated the program last year, though the annual fee previously attached to the decals will remain.

Now, the Board needs to make a few tweaks to its existing ordinances to eliminate any reference to the car decals. Members are set to take up the matter for the first time at their meeting Saturday (Feb. 23).

Proposed changes to the county code include the elimination of police officers’ authority to hand out fines for not displaying a valid “license tag.”

However, county workers will still be able to write $50 tickets if they discover drivers haven’t paid that motor vehicle fee, thanks to license plate reader technology increasingly embraced by the county treasurer’s office.

The changes would also clarify that the “motor vehicle license fee” will still be collected alongside property tax payments, even though it’s no longer attached to any decals.

The Board would also stipulate that the annual license fee is “not to be prorated” and is only refundable “when proof is provided that the fee was paid in error” under the proposed alterations.

In order to make the changes official, the Board plans to call for an April 2 public hearing on the matter, then hold a final vote immediately afterward.